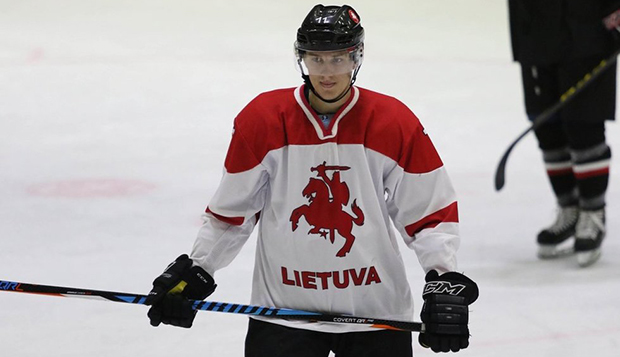 Arturas Laukaitis returned to Lithuania in 2017 to help lead its senior national team to a tournament gold medal.

The 2019-20 recruiting class for Liberty University ACHA Division I men's hockey team will have a European flavor, with two recruits from the Ukraine and one from Lithuania — forward Arturas Laukaitis, a transfer from NCAA Division III University of Wisconsin-Stout.

Born in Moskva, Russia, Laukaitis, 22, has dual citizenship as his father is Lithuanian and mother is from Russia. He picked up hockey in Russia at age 4 and played there until he was 14 before continuing to develop his game over two years in Germany and two more in Lithuania. He has spent the past four seasons playing junior and collegiate hockey in Canada and the United States, returning to Lithuania in 2017 to help lead his senior national team to a gold medal in a tournament.

"I moved to America for better hockey and a better life, with intent to stay here and start a family," said Laukaitis, whose original plan was to play for an NCAA Division I school. "Overall the level of quality of life is much better here with better opportunities. You can do anything in the United States if you are smart. Nobody is going to tell you that you can't."

He has proven himself as a prolific scorer on the ice, netting 34 goals and distributing 43 assists in 45 games with the NA3HL Atlanta Capitals in 2015-16, before totaling 46 goals and 38 assists in 43 games with the El Paso (Texas) Rhinos of the Western States Hockey League in 2016-17.

"Arturas is going to give us some more skill up front and he can definitely put the puck in the net," Flames Head Coach Kirk Handy said.

"I can finish if I have a good opportunity, but I like to create offense and play team hockey, not individual hockey," he said. "The team comes first and I hope I can affect positively everyone on and off the ice."

Laukaitis has already started building relationships with his future teammates and growing in his spiritual walk.

"During my visit at Liberty, I felt how much faith people have there and how much positive energy they share with people," he said.

Laukaitis, who speaks Lithuanian, Russian, and English fluently, comes from a blue-collar family and is working to pay his own way through college. He plans to continue pursuit of a business degree at Liberty, with a goal of eventually becoming a U.S. citizen and starting his own business after graduation.

"It is a long process and I have long way to go," Laukaitis said. "I have to show that I am valuable to the country. Eventually, I want to own my own company that would provide profitable service, to build a corporation that will help people. I want to start something big."