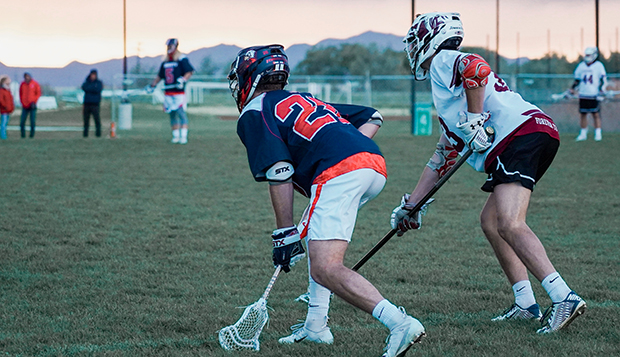 After a scoreless first quarter, both teams netted four goals in the second and one in the third before the Gamecocks pulled away in the fourth quarter of a 9-6 season-ending setback for the Flames.

"It was a dogfight," Liberty Head Coach Kyle McQuillan said. "You've got to play a close to perfect game to beat a team like USC and we made a few too many mistakes."

No. 3-seeded USC (19-2) overcame an 12-11 loss at Liberty on March 30 and traded places with the No. 6 Flames (16-2) after knocking them out of the SELC semifinals for a second year in a row. The Gamecocks beat Liberty twice for the second straight season, denying its first MCLA DI Final Four appearance with a second consecutive second-round setback.

"It's a tough pill to swallow, losing two games in the postseason to a team we had beaten in the regular season," McQuillan said. "This was a fantastic season and the guys have a lot to be proud of."

In the first quarter, the Gamecocks held sizeable advantages in time of possession and shots (16-4) and had the first of three goals on the night negated by crease violations.

After a quick transition, USC attack Andrew Pizzo netted the game's first goal with 12:39 left in the second quarter. Just over two minutes later, with the Flames in a man-up situation, senior attack Sam Gregory knotted the game at 1-1 on a sidearm shot from the left side into the upper netting.

Senior midfielder C.J. Nichols then received an assist from junior midfielder Derrick Esh on transition and dashed down the left side of the box before beating Gamecocks goalie Colin Haines with a low shot for a 2-1 lead at the 9:48 mark.

The Flames netted another man-up goal 5:52 before halftime when Gregory set up junior midfielder Carter Elliott with a short pass in the left side of the box and for a top-shelf finish.

But as they did throughout the contest, the Gamecocks answered quickly, capitalizing on a Liberty turnover 21 seconds later when Sam Weis received a feed from Tanner Tweedy in the right side of the box, where his overhand shot trimmed the deficit to 3-2. After another turnover, USC long-stick midfielder Chris McPoyle sparked a fast break counterattack that knotted the contest at 3-3.

With 38 seconds left in the first half, Nichols drove along the left endline and pulled up for a shot over a defender in the left crease, putting the Flames back on top, 4-3. However, Griffin Bailey retied the contest at 4-4 with 20 seconds left by unleashing a long shot off an assist from Weis.

Esh made a quick pickup of a ground ball at the top of the box and scored the first goal of the second half while falling down, giving the Flames a 5-4 edge with 5:54 left in the third quarter.

But the Gamecocks struck back on a man advantage when Jordan Hummel picked up a loose ball in front and deposited it into an open net, tying the game at 5-5 at the 4:14 mark.

USC seized its first lead since going up 1-0 when Liam O'Donnell sent a pass from behind the net to Pizzo in front for an upper-net finish with 11:24 left in the fourth quarter. Just over a minute later, Pizzo received a pass from Jono Durham slammed it in for a 7-5 advantage.

After Elliott rifled a shot from in the right side for a man-up goal with 4:27 left, the Gamecocks retaliated 34 seconds later when Weis drove from behind the cage, scoring with a low shot.

Following a USC timeout, Griffin Giles maneuvered around a Liberty double-team and found an open net, stretching the lead to three goals for the first time on the night with just over two minutes to go.

The Final Four will feature the top four seeded teams in the 16-team tournament: No. 3 USC against No. 2 Chapman and No. 4 Georgia Tech against No. 1 California.