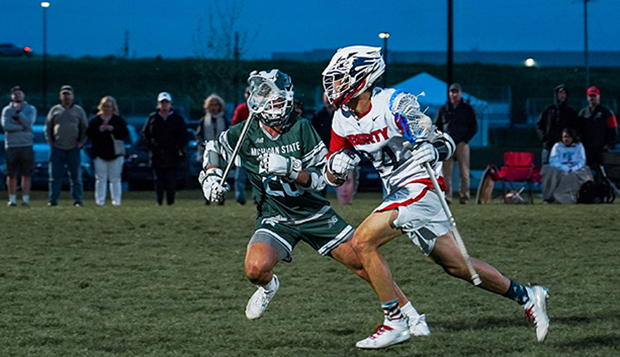 "It was a little close going into halftime, but we definitely felt we were in control of the game and had more possession time," Liberty Head Coach Kyle McQuillan said. "The guys were acclimated to the altitude and time changes and they excelled tonight. They looked fast and played with a lot of energy and gave us a lot of momentum going into the second round."

"Carter had a huge game for us," McQuillan said. "They didn't really have an answer for him and then C.J. got things rolling there late. It's a testament to the depth of our team."

Elliott bounced off a defender and pivoted at the top of the box before netting the equalizer at the 9:20 mark and then gave the Flames a 2-1 lead just over three minutes later by finishing an assist from freshman attack Cooper Branham.

After Liberty junior attack Caleb Britton ripped a shot off the left post and Harriman saved a point-blank behind-the-back attempt by Michigan State, Flames senior attack Sam Gregory capitalized on a fast break assist from Britton for a 3-2 edge early in the second quarter.

Elliott, who extended Liberty's lead to 4-2 with a running shot down the left side, showcased his explosiveness by sprinting across the box and firing his fourth goal into the upper netting at the 3:15 mark. Spartans defenseman Will Pankratz ended the first-half scoring, catapulting a shot from three-quarters field into the back of the net.

Elliott started the second-half scoring with a sharp-angled fadeaway shot from the left wing with 10:39 to go in the third quarter before back-to-back goals by Bowman and MSU midfielder Keaton Mitchell made it a one-goal game.

Junior midfielder Derrick Esh dodged past a defender and unleashed a shot into the upper netting 45 seconds later before Elliott assisted Nichols, who unloaded a cannon from the left perimeter.

A minute into the fourth quarter, junior midfielder Austin Aguilar sprinted the ball up the left wing on transition before sending a pass from behind the Spartans' cage to Britton for a high-percentage finish in front, pushing Liberty's lead to 9-5. Nichols bounced in a shot from the top of the box less than a minute later for a 10-5 advantage before MSU long-stick midfielder Ian Genord answered on the other end with 10:30 remaining in regulation. Nichols responded with a long-range strike from the right side before Britton stole the ball back on the defensive end and set up Gregory for a point-blank putaway for the final score.

Liberty will face third-seeded South Carolina (16-2), a 9-5 first-round winner over No. 14 Santa Clara, in Tuesday's 9:15 p.m. (EST) quarterfinal, a rematch of the past two SELC Tournament semifinals won by the Gamecocks. That will be one of two all-SELC quarterfinal showdowns on Tuesday night, with Georgia Tech playing Florida State on an adjacent field.

"We feel good," McQuillan said. "We've played USC twice this season and (Tuesday) will be the rubber match. We planned all season to get to the SELC championship game and they kept us from accomplishing that goal."

The MCLA will webcast the game on livestream. 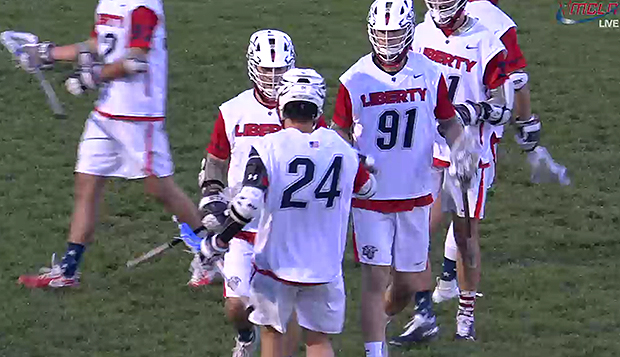