Le Sieur to challenge for vacated goalie spot this fall 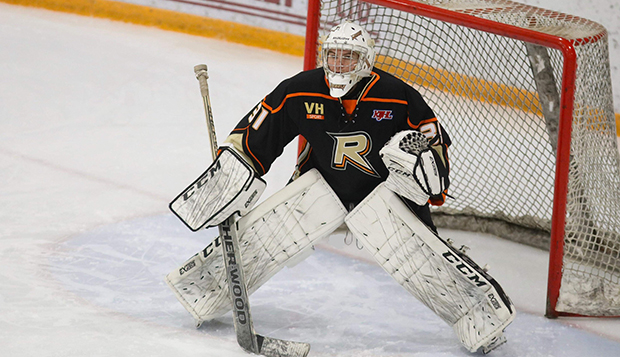 It only took one College For A Weekend (CFAW) visit in early April for Cedric Le Sieur to confirm that Liberty University was where he wanted to continue his hockey goalkeeping career and pursue a degree in athletic training.

LeSieur participated in Liberty's ACHA Division I men's hockey spring camp later in the month and committed to join the Flames for the 2019-20 season.

"I am really looking forward to it," Le Sieur said. "The whole aspect of faith created a different vibe on campus and was definitely attractive. After the visit, I sat down with my family and told them that's where I want to be and we are super excited for the next four years."

Originally from Montreal, Quebec, Le Sieur, 20, played all over Canada throughout his junior hockey career with a couple stops in Utah, where he had several international teammates.

"It will be cool to play with that diverse of a group (at Liberty), and cool that there are guys from all over the United States and all over the world," Le Sieur said. "Getting to meet the guys throughout the week I was there was amazing. I had nothing but positive interactions and everyone was super helpful."

Le Sieur brings a wealth of experience and expects to contend for playing time immediately next fall, when the Flames must replace both of their goalies, graduating seniors Cole Burack and Josh Halpenny, from last season.

"I've had conversations with (Flames goalies coach) Dan Berthiaume who said both of the incoming goalie recruits will come in with a fresh start," Le Sieur said. "We will not be competing with each other. We are working together to help the team achieve success. That's something I've done throughout my juniors career — to take a team approach. It doesn't matter who's in the net. The other goalie has to be supportive and ready for anything."

In addition to meeting his future teammates and coaches during his visits to Liberty, Le Sieur also became familiar with the Club Sports Athletic Training staff and its facility inside the LaHaye Ice Center.

"When I came down for the visit, I met the strength and conditioning coaches and athletic trainers, and they were all pretty happy and eager to explain to me the program and all of the hands-on experience that students can get," Le Sieur said. "I'm a sports fan in general and getting a chance to work with some of the other (Club Sports) teams would be an amazing opportunity and something I would love to do."

The first time Le Sieur ever saw or heard anything about Liberty Hockey was when he came across a highlight show to one of the Flames' Midnight Mayhem games.

"I couldn't believe how the students (and other fans) pack that arena and the enthusiasm of the crowd," he said.

Starting this fall, he aspires to help the Flames return to the ACHA DI National Championships in pursuit of their first national title.

At 6 feet, 190 pounds, LeSieur has good size for a collegiate goalie and is very mobile around the cage.

"When I can, I try to be conservative, but I definitely have to anticipate plays more and be more aggressive, and that plays into my game," Le Sieur said. "When it comes down to it, I'm a guy who will do anything to stop the puck."