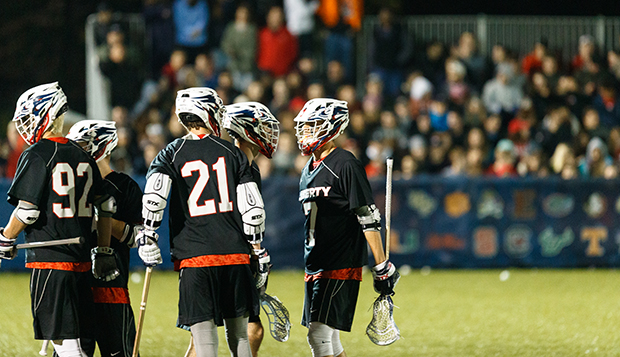 The Flames will have a full roster available for the tournament that runs through next Saturday. (Photo by Luke Bobbey)

The Flames (15-1) were the only team to beat the Spartans last year and won a March 13 rematch, played on an indoor turf field in Grand Blanc, Mich., 18-7.

"Michigan State has played a lot of lacrosse since then and we expect to get their best performance," Liberty Head Coach Kyle McQuillan said. "Any time a team is defending a national championship, there's a lot of pride on the line and it is not going to go quietly."

After losing an SELC Tournament semifinal rematch with South Carolina this past Saturday near Atlanta, Liberty received its second at-large bid to nationals in its sixth season playing at the Division I level. The Flames won their first-ever national tournament game over Concordia (Calif.) last May in Utah before losing a second-round showdown with top-ranked Chapman (Calif.) in overtime.

"We have to refocus after coming up short against South Carolina, especially with a group of guys who haven't experienced defeat this season," McQuillan said.

A win over MSU could set up a third meeting between Liberty and USC this season in Tuesday's quarterfinals if the Gamecocks, seeded third, get past No. 14 Santa Clara (Calif.).

The complete tournament bracket is available online. The Flames are one of four SELC teams in the tournament, matching last season's high.

McQuillan hopes Liberty can dictate the game's tempo from the start as it did at MSU, led by senior midfielder C.J. Nichols, the SELC Offensive Player of the Year and one of seven Flames recognized on the All-SELC Division I teams.

"Last time, we did a really good job of being the aggressor, especially early, getting on the board quickly, and Michigan State was never able to find its traction and get back into the game," he said. "We definitely have that potential, but in recent games against Virginia Tech and South Carolina, our offense faltered a little bit, so hopefully we can get back on track."

The tournament will take place on grass fields at the Salt Lake City Regional Athletic Complex, situated more than 4,000 feet above sea level.

"We should have time to acclimate to the time change and the elevation changes, which shouldn't be an issue," McQuillan said, noting that the opener will be the Flames' first of the season not played on turf, which could make ground-ball pickups and goalie saves more difficult.

Liberty's depth should be a factor in its favor, especially as it progresses through the tournament. The Flames are in the best condition they have been this season.

"We've got some standard issue bumps and bruises, but we are pretty healthy going into Salt Lake City and expect to have everyone available," McQuillan said. "Injuries are something to contend with late in the year, but we are fortunate to have (athletic trainer) Tariq Kelly and (strength and conditioning coaches) Jessi Glauser and Justin Killian making sure our guys are healthy and able to stand the test of time. We've got depth on both sides of the ball and that puts us in great position to be very competitive at a tournament like this where we have a lot of games in a short period of time."

The semifinal games are scheduled for Thursday at 6:30 and 9:15 p.m. followed by Saturday's 4 p.m. championship. All four rounds of the DI and DII tournaments will be webcast live by the MCLA.