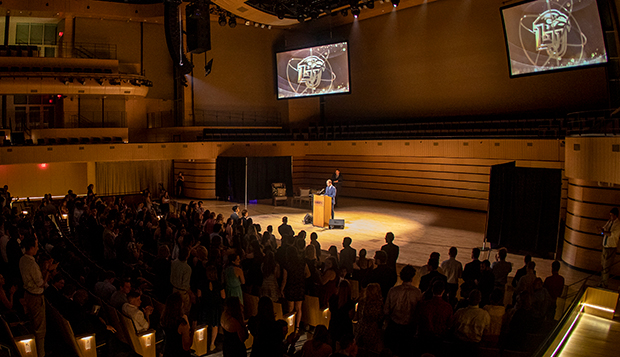 The Club Sports Choice Awards showcased the Center for Music and the Worship Arts, Concert Hall. (Photos by Joel Isimeme)

Liberty University's Club Sports department honored the more than 600 student-athletes on its 41 programs at its annual Club Sports Choice Awards ceremony in the Center for Music and the Worship Arts, Concert Hall.

The event, orchestrated by Club Sports Director of Recruiting and Special Events Kaycee Tripp and hosted for the third year in a row by Game On co-anchors Rett McGibbon and Matt Warner, followed a festive reception with Hawaiian-themed hors d'oeuvres and live music on the Commons Lawn.

Spectacular highlight videos produced by Club Sports Assistant Director of Video & Media Patrick Strawn set the stage for the awards presentations and brought the ceremony to an exciting end.

The Lady Flames' ACHA Division I women's hockey team, which defended its national title in March for its third championship in five seasons, was selected as Women's Team of the Year following its 28-1-3 season. Leah Carlson was also named the Assistant Coach of the Year.

Men's Team of the Year honors were awarded to the men's lacrosse team, which rose to No. 3 in the MCLA Division I rankings during its first undefeated regular season and will make its second straight National Championships appearance in Utah next week.

First-year senior midfielder C.J. Nichols, a transfer from Florida Tech, was designated Club Sports Rookie of the Year after being named SELC Division I Offensive Player of the Year as Liberty's leading scorer with 41 goals and 26 assists.

Men's volleyball Head Coach Bryan Rigg, who announced he is stepping down after his 10th season at the helm to focus on pastoring his church and spending more time with his family, was selected as Club Sports Coach of the Year. He guided the Flames to their best season in program history highlighted by a No. 2 national ranking and a first-ever East Coast Championship title and Final Four finish in the Gold bracket at the NCVF National Championships in Denver.

"It has been a wonderful, wonderful ride," he said. "You guys are amazing."

Senior Kaden Knepper, Rigg's starting setter for the past four seasons who set program records with more than 2,000 assists and 200 aces along with close to 500 digs, was named Male Athlete of the Year.

Cendall Manley, a junior wrestler from Hawaii who won her third consecutive NCWA women's national championship in Texas, was named Female Athlete of the Year. She thanked Flames Head Coach Jesse Castro for keeping the team focused on Christ and constantly pushing her to glorify Him by wrestling her best.

Junior Cody Richmond, one of the Flames' 11 All-Americans on their defending NCWA Grand National Tournament championship team that won its third title in five years, received the Perseverance Award.

Richmond re-enrolled last year and rejoined the wrestling team despite working a full-time job. He overcame a broken hand to place seventh at nationals, fulfilling a promise to his grandfather, who died of cancer in 2016, with the support of his mom, who is battling cancer herself.

Senior defenseman Jackson Roy, a second-year captain of the Flames' ACHA Division II men's hockey team, was honored with the Champion Award for his commitment to and leadership of that team.

Freshman Carl Pongs, who won a national title in Sporting Clays and led the Flames' shooting sports team in three other events at the ACUI Collegiate Shotgun National Championships in San Antonio, earned the Outstanding Performance of the Year.

Seniors Thomas Siff, a black belt on the men's taekwondo team, and Emily Weatherholt, a member of the women's rock climbing team, shared Academic Athlete of the Year honors as two of several Club Sports student-athletes sporting GPAs of 4.0 or better.