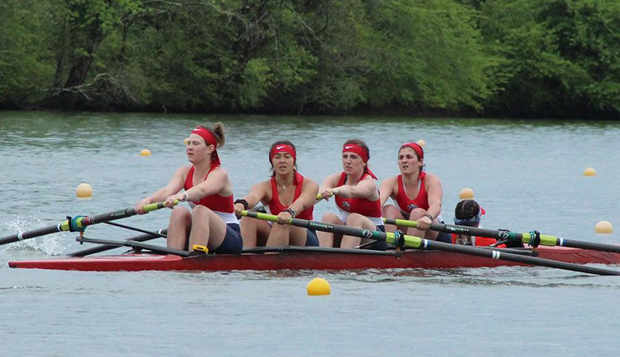 "We had a great trip," Liberty Head Coach Debbie Prowse said. "The regatta was a nice, low-key event and it was convenient for us in that we could race and come back on the same day."

Freshman Lindsey Bicknell, sophomores Joanna Moran and Meredith Thompson, and junior Tori Drumheller paced the women's Novice 4 with senior Kaylee Ruiz serving as coxswain. Despite rowing against the current and competing with a crosswind, they finished the 2,000-meter race in 8 minutes, 50 seconds, well ahead of two crews from VCU that crossed the finish line in 9:14 and 9:31 and a boat from Virginia Tech that completed the course in 9:59.

After a rolling start, the Flames crossed the finish line of the 2,000-meter race a second behind Virginia Tech's winning boat in 6:55, well ahead of VCU's third-place boat that finished in 7:22 and ODU's that placed fourth in 7:53.

The Lady Flames' Novice 4 will be joined by Krupansky and Weisman, who will compete in the men's double the May 24-26 American Collegiate Rowing Association (ACRA) National Championships at Lake Lanier in Gainesville, Ga.

As a last tune-up for that event, both boats will travel to the Jefferson Dadvail Regatta set for May 10-11 on the Schuylkill River in Philadelphia. There, Krupansky and Weisman will row against 62 other men's double tandems, including skulls from Clemson, MIT, and Washington College, and the women's Novice 4 crew will compete against boats from Clemson, Duquesne, Lafayette, Loyola, UMass, and Tampa, among others.

"There will be a lot of NCAA Division I, II, and III teams there, so it will be exciting for us to see how we compare with some different schools we won't see at ACRAs," Prowse said.