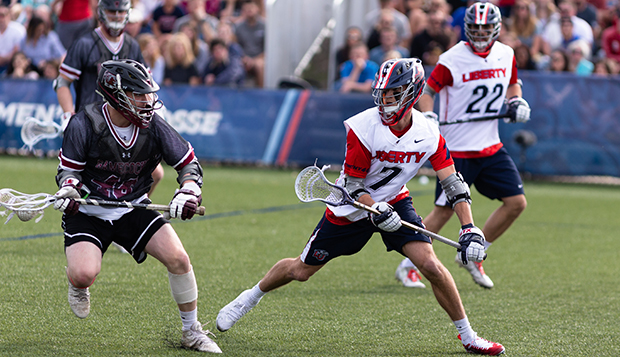 The Flames (15-1, ranked third in the MCLA) lost for the third time in four tries over the past two seasons against the sixth-ranked Gamecocks (16-2).

"Unfortunately, it was not one of our best efforts," Liberty Head Coach Kyle McQuillan said. "We just made too many mistakes, but we give South Carolina credit. They were capitalizing on them. It was not a game we were happy with on either side of the ball."

The Gamecocks won the faceoff battle against the Flames, giving them advantages in time of possession and scoring chances.

"Last time, we were able to counter that by creating turnovers with our ride and starting fast breaks with our clears, but we struggled clearing the ball in the 10-man ride tonight," McQuillan said. "They were taking long field shots and backing them up, which got them some free clears and gave them possession."

In the first quarter, the Flames had as many turnovers as shots on goal, setting the tone for the contest. Liberty was held under 10 goals for only the second time this season.

The Flames scored first in a man-up situation with 8:40 left in the first quarter when senior attack Sam Gregory received an entry pass from junior midfielder Carter Elliott in the left crease and maneuvered around a defender before firing a turnaround shot into the top right corner of the cage for a 1-0 lead.

Just over 30 seconds later, South Carolina sophomore attack Sam Weis capitalized on a two-on-one break, tying the game at 1-1, before ending a 12-minute scoring drought for both teams by coming out from behind the right side of the goal and sneaking a short shot past Flames senior goalie Brayden Harriman. That gave the Gamecocks a 2-1 edge that they would not relinquish.

Liberty ended its 22-minute scoreless stretch by taking advantage of a man-up situation, with junior attack Caleb Britton taking a pass from Gregory at the left side and netting a turnaround shot top shelf, cutting it to 5-2 just 1:38 before halftime.

Then, in the opening 50 seconds of the second half, senior midfielder Chase Wright trimmed the deficit to 5-3 by unleashing a perfectly placed shot into the top right corner of the cage. Wright made it a one-goal game at the 12:01 mark after taking a pass over the defense from Gregory and dodging a defender in the right side of the box before skipping a shot into the lower right corner of the net.

However, after junior attack Jono Durham scored out of USC's set offense, Weis capped a fast break with a behind-the-back finish as he sliced through the left crease, putting the Gamecocks up 7-4 with 6:56 left in the third quarter.

Durham later dodged a defender along the left end line and beat Harriman with a shot as he fell down with 20 seconds left, extending USC's lead to 9-5 at the end of the third quarter. The Gamecocks all but put the game away midway through the fourth when Weis set up junior midfielder Jordan Hummel for a shot from the top of the box and a 10-5 advantage.

Wright charged into the center of the box and bounced a shot into the upper netting moments later, but USC midfielder Griffin Giles responded with a running shot through the five hole to make it 11-6 at the 5:55 mark.

Less than 30 seconds later, a long bounce shot from the top of the box by Elliott and then Gregory's shot from the left side pulled Liberty within 11-8 with 3:57 left. But the Flames' attack stalled and Weis beat replacement goalie Ryan Reynolds one-on-one for his seventh goal with 55 seconds to play.

"We came in with an expectation to win an SELC championship and we fell short," McQuillan said. "We can't waste a failure. We've got to learn from it and use it to make us better and stronger."

The Flames will practice through exam week before flying back to Salt Lake City on May 5 for their second consecutive trip to the MCLA Division I National Championships, May 6-11.

"It will be a quick turnaround, but our sights are set on nationals," McQuillan said. "Right now, it feels like it's a big hill to climb to regroup and come back to practice and focus on our next goal, but I am confident our guys will respond."