Litzau to join brother on beach volleyball team in 2019-20 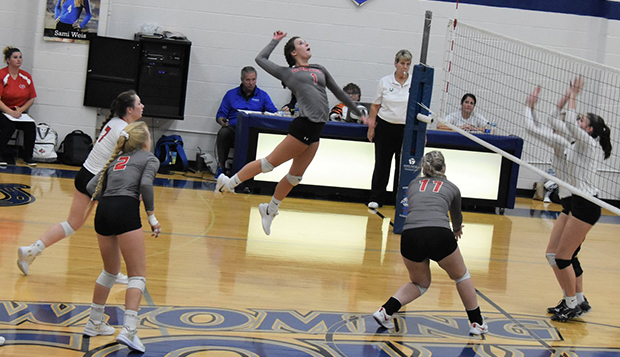 In the midst of the most competitive stretch of their spring season, Liberty University beach volleyball Head Coach Kaleb VanDePerre and Assistant Coach Jess Nelson are building on a solid foundation for next year.

Earlier this month, the Lady Flames signed Olivia Litzau, a powerful outside hitter for her high school indoor volleyball team in Ohio who has several years of beach volleyball experience.

She is the younger sister of current Flames sophomore beach player Jacob Litzau and the daughter of former Liberty men's indoor player Jonathan Litzau, who played outside hitter and defensive specialist from 1992-94.

"She has a really strong attack and is an on-court leader," VanDePerre said. "Similar to (2018 recruit) Merabeth Hammersmith, she was one of her high school's best players, historically. I expect her to have a little bit of a learning curve coming in, but her athleticism will help her adjust. There is a pretty big beach scene in Ohio and she is going to play a lot over the summer and a lot of her indoor game will transfer over to the sand."

A four-year varsity starter and two-year team captain at Goshen High School, Litzau finished her career ranked second in school history with over 700 kills. Academically, she has been on the honor roll for the past 10 semesters and carries a 4.28 grade-point average.

She also served as a Fellowship of Christian Athletes (FCA) Class Officer for the past two school years and has played indoor travel volleyball for the Northern Kentucky Volleyball Club.

"I was being recruited by several Division II and Division III schools as an outside hitter, but when I visited Liberty for CFAW in 2017, I fell in love with the campus and the Christ-centered atmosphere," Olivia Litzau said. "When I came to work out with the team earlier this year and I heard about Coach (VanDePerre's) big dreams for the beach program, I knew it was a great fit."

Litzau, who plans to study elementary education and pursue dual licensure in special education, enjoys beach volleyball as much as the indoor game and says playing both has benefited her.

"As an indoor player, I pushed myself to not only be a great hitter but to develop my defense and passing game as well," she said. "Even though beach is so much different than indoor, I love it because you absolutely have to be an all-around player to compete."

She expects to challenge for one of the five starting women's pairings and win a tournament her freshman year, complementing her performance in the classroom.

"I think the fundamentals of discipline, hard work, and teamwork that come along with playing a sport directly translate to success in life," Litzau said. "I have big expectations for the upcoming season and I am looking forward to making memories that will last a lifetime at Liberty, both on and off the court."