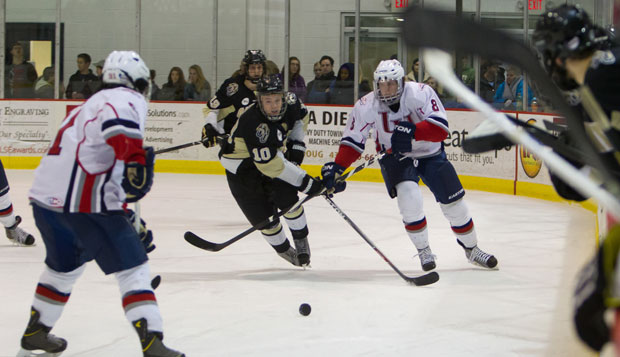 When Lindsay LeBlanc scored a power-play goal on the follow of a shot by Scott Morongell, knotting the score at 1-1 just 3 minutes, 34 seconds into Friday night's game, fans of Liberty University's Division I men's hockey team threw 537 stuffed animals onto the rink of the LaHaye Ice Center.

"That was awesome," Flames head coach Kirk Handy said. "It was something we started last year, for Gleaning for the World, and we got 100 more (animals) this year than we did last year."

Unfortunately, the good will gesture in support of the Teddy Bear Brigade didn't have the same effect as Detroit Red Wings fans hurling an octopus onto the ice during the Stanley Cup Playoffs.

Oakland (Mich.) University, located just north of Detroit, responded with the next three scores to seize leads of 3-1 going into the second period and 4-1 heading into the third. The Grizzlies then countered a Flames goal with less than nine minutes left in regulation with their fifth and final score in a 5-2 conquest in the rematch of the 2006 DII championship game, also won by Oakland.

"The tide turned … when we gave up three goals in the first period, which isn't definitely how you want to start the game," Handy said, noting the Grizzlies got on the scoreboard first on a breakaway by Adam Novak just 21 seconds after the faceoff. "We got away from our game plan."

Liberty got back in the game midway through the third period when Morongell's slap shot from near the right side of the blue line was deflected in off assists from Matt Sherry (his second of the game) and Christian Garland.

"In the third, when we changed up the lines a little bit, I thought we put on our hardhats and started working again," Handy said.

However, Oakland padded its lead back to three goals just a minute and 18 seconds later when Anthony Colizza completed his hat trick with 7:35 to play.

Grizzlies' goalie Matt Toter, a transfer from Liberty, evened his record at 7-7-1 and lowered his goals-against average from 2.92 with the win, stopping 24 shots. For the game, Oakland outshot the Flames 38-26.

"They outworked us tonight and if they outwork us, those guys deserve to win," Handy said. "We have to change our work ethic for (Saturday) and come back ready to go."

"They're a good team," Handy said. "We're a good team, too, and we're going to come back (Saturday) ready to play … an overall better team game. We have some injuries where guys are out for the year, Blair (Bennett) and (Luke) Baumgarten and so on and so forth. But we're not going to hold that as an excuse. We're excited that (Saturday) night will be another game and we're going to have to play well."