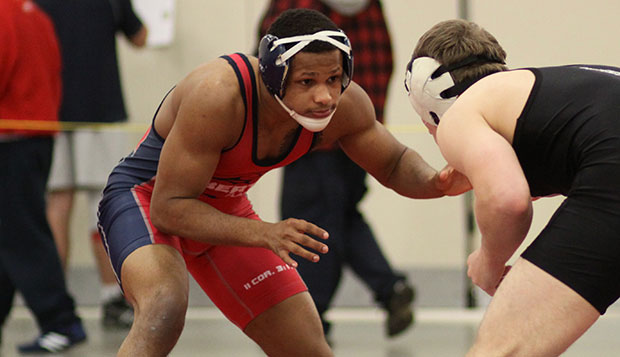 A week after suffering a 26-23 setback against Ohio Valley University in West Virginia, Liberty University's wrestling team traveled to Laurinburg, N.C., for another nail-biter, dropping a dual meet at St. Andrews by a 23-21 score on the last of three lead changes.

This time, Liberty held a 21-12 advantage on the Knights going into the 197-pound bout before Jared Key recorded nine takedowns in a 22-7 technical fall of Jacob Hood, pulling St. Andrews back within 21-17.

In the decisive heavyweight bout, returning NCWA all-American sophomore Denzel Vaughan (11-2), needing a major decision to tie or a technical fall or pin to lift his team to victory, completed the comeback with a fall of Flames' transfer Josh Travers on his third takedown just 2 minutes, 6 seconds into the match.

"Going into the heavyweight match, we were ahead and got pinned," Liberty head coach Jesse Castro said. "We only had three starters wrestling for us again … for various reasons, injuries and other things … so it's very difficult to win a match like that."

The Knights (6-10) opened the dual meet with three-straight victories to build a 12-0 advantage on Chauncey Foster's 21-6 tech fall over Liberty sophomore Jeremy Beale at 125, Josh Tegard's 11-3 major decision over Carey Caprio at 133, and Sterling Perry's 4-0 decision of Josh Sanders at 141.

Sturgill fought off his back to pull out his match after being arm-tossed by Leggett.

But that's when the wheels came off the cart as the Flames' inexperience in the upperweights —without regulars Royal Brettrager, Aaron Thompson, and Andrew Wilson — showed down the stretch, with Vaughan recording the match's only pin of the night.

The two teams split their 10 matches and Liberty's one forfeit win, also worth six points, countered the pin, but the Knights' two technical falls accounted for the two-point difference.

Barring major snowfall on Friday, Liberty will travel to Edinboro, Pa., to compete in Saturday's 24th-annual Edinboro University Open, hosted by the Fighting Scots, the same nickname as that of Ohio Valley. Action in the individual tournament is scheduled to start at 9 a.m.