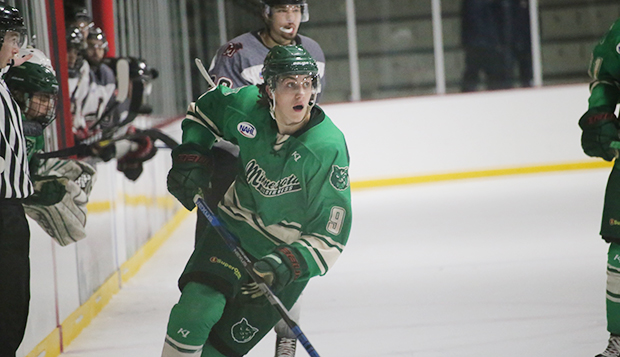 Colin Baird, 19, played the past two seasons with the Minnesota Wilderness of the North American Hockey League.

He will help provide depth on a defense that graduates Matt Cruickshank and Kyle Crane this spring.

"He's a real solid addition to our defensive corps, someone who we feel will be a great representative of Liberty both on and off the ice," Flames Head Coach Kirk Handy said. "He does things on the ice that are real special, and he fits the culture at Liberty and also in our hockey program, both in the locker room and on our lineup."

Baird, 19, played with freshman forward Josh Fricks the past two seasons for the Minnesota Wilderness in the North American Hockey League and previously was a member of the Des Moines (Iowa) Buccaneers in the United States Hockey League.

"He's got a lot of great junior hockey experience in different leagues and a solid hockey background, which is fantastic," Handy said. "We have watched him play and we love the way he plays the game."

Baird, who is the first in his family of six to play hockey, plans to study finance through the School of Business.

"I really enjoyed my junior hockey experience," he said. "I developed a lot as a player, and I'm excited about the opportunities it's enabled me to have. I'd love to (play professionally), but if not, with my degree from Liberty I will be well prepared for whatever life brings."

He is also friends of the family of Flames junior forward Brock Thompson, who told him about Liberty's program and came with him on his first visit to Lynchburg, Va., in late July.

"That was when I met the coaching staff and took a tour of campus," Baird said. "Learning about the largest Christian school in the world was amazing and that really drew me in. Last week, when I came back, I met my teammates and am looking forward to spending the next few years with these guys."

He said his size and skating ability are two of the greatest attributes he brings to the table and expects to be able to contribute to the Flames' success immediately starting this fall after a summer spent conditioning for the college game.
"Getting in top-playing shape will be very important because it will be a quick transition to prepare for the season ahead," said Baird, who enjoys golfing and fishing in his free time. "It will take a lot of hard work this summer and a lot of high-end practices and hockey-specific training on and off the ice."