Flames' divers land in third place at nationals in Colorado 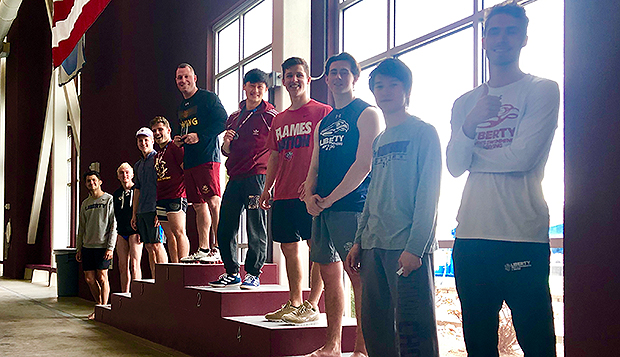 Liberty University's second-year men's diving team placed third out of five teams at last weekend's Collegiate Club Diving National Championships in Mesa, Colo. The Flames (112 points) finished behind host Colorado Mesa (288) and Colorado Boulder (147) and ahead of Kansas (100) and Kansas State (45) after ranking second in the 3-meter diving competition (47 points) and the men's synchro event (20) and third in the men's 1-meter diving event (45).

"It was a really good competition," Flames Head Coach Heath Grishaw said. "We were able to see some really great improvement from our divers, who brought home a banner. We were extremely blown away and excited."

"(Assistant Coach) Lucas Wood is doing a phenomenal job," Grishaw said. "The team has been responding well to his coaching and you could see that this weekend."

It was the first year the event was held separately from the Collegiate Club Swimming National Championships, hosted by Ohio State on March 28-30.

"We want to see if we can get more schools to start a diving program and make it a bigger sport in the club collegiate world," Grishaw said, noting there were nearly 2,000 men's and women's swimmers but less than 30 men's and women's divers at this year's meets. Lucas and I are trying to be a part of that and lead the charge along with Colorado Mesa."

Grishaw is focusing on growing both the swimming and diving teams in both size and skill level.

"I care about both teams equally and am trying to recruit for both," he said. "We're still looking for some divers. People will come and the team is going to grow tremendously. I'm excited about where it's heading. The sky's the limit with this team."