Paintball lines brush up for nationals at open tournament 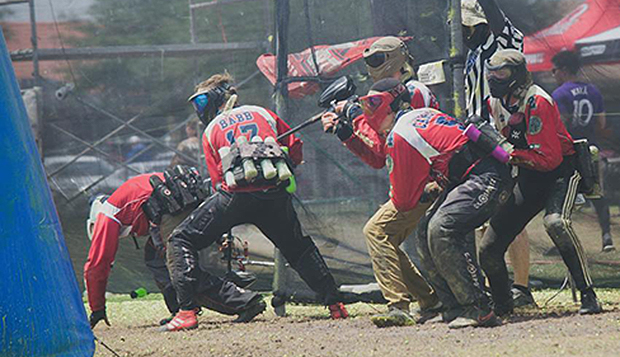 Liberty University's paintball team was the only collegiate representative at the March 30-31 Eastern Paintball League Open tournament played in in Chesapeake, where the Flames' top two Class A lines finished fourth and fifth out of 13 teams in Division 4 and a third competed in Division 5.

"It was a good practice and tournament experience to put the finishing touches on our preparations for nationals," Liberty Head Coach Brian Davidson said of this weekend's National Collegiate Paintball Association (NCPA) Championships. "It gave them a good exercise to go through losing and winning and to see what we need to improve on."

The Flames then scrimmaged North Carolina State on Sunday at the Liberty Paintball Fields before leaving for Kissimmee, Fla., on Wednesday, when they will find out the layout for the bunker set-up.

At Chesapeake, Liberty's starting Gold line of juniors Josh Montanari, Austin Larson, and Kyle Babb, graduate Brent Jones, and senior Zach Moore, backed up by senior Corbin Ryan and freshman David Lopes, went 3-1 in pool play while the Red line finished and entered the playoffs as the sixth seed. Liberty's Gold team edged its Red squad, 2-1, in the quarterfinals before falling to the eventual champion Virginia Beach Assassins, 2-1 in the semifinals.

"I was definitely very pleased with my guys, who were literally seconds away from moving onto the finals match," Davidson said, noting that the Assassins hung the winning flag with less than a second remaining in regulation.

The Flames' Class AA line finished 10th out of 12 teams in Division 5 after being eliminated in the quarterfinals.

Davidson is cautiously hopeful that all three of his lines will fare well at nationals, where the Gold team will try to become the first program in the tournament's 20-year history to defend its Class A national title.

"We definitely have some returning players and a good amount of experience going into it and I feel optimistic about the competition at hand with the training we've done this year," he said.

Liberty is making its 13th consecutive trip to nationals as a program. The Flames' top line will face competition from at least nine other teams, including Central Florida, which it defeated in last year's championship match, and other strong contenders including Florida Atlantic, Temple, and Drexel.

"We don't know what we're going to see at nationals. It's always something different," Davidson said. "We have been working hard, getting our physical conditioning up. It is always hot and humid down in Florida, and it can be a shock to the body, but I think we're as ready as we can be."

Liberty's Red and Blue squads will look to improve on last year's eighth-place Class AA showing, with at least 26 teams in the field.

"Our AA lines get the opportunity to play against some of the best collegiate players in the country every weekend and they're learning quickly," Davidson said.

All three lines will play four preliminary matches on Friday and Saturday before the top eight in each class advance to Sunday's single-elimination quarterfinals. The Class A teams will play two 10-minute halves while the Class AA squads play Race to 2 matches.