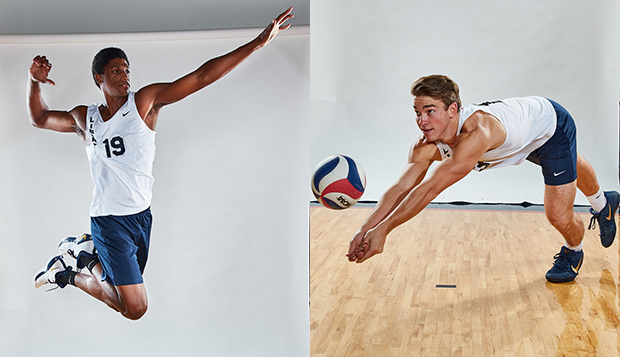 The senior middle hitter and setter combination has eclipsed a total of five school records for one of Liberty's longest-running Club Sports programs. Dejesus has racked up 233 blocks and 547 kills and recorded a .410 hitting percentage for his career while Knepper, a third-year team captain, has distributed 1,873 assists and served 186 aces.

"They were both walk-ons and have ended up being the most decorated and arguably the most successful players in Liberty men's volleyball history," Flames Head Coach Bryan Rigg said.

Dejesus is a two-time All-East Coast Volleyball Association (ECVA) first-team selection and Knepper has made the All-ECVA South Division I first team twice. They have been a stabilizing force on a team that has risen to No. 3 in the National Collegiate Volleyball Federation (NCVF) Division I rankings.

"When the game is on the line and we are looking for leadership, those are the two guys we look to," Rigg said. "We have relied on them time and time again."

The Flames are among the favorites to win their first East Coast Championships title Saturday in College Park, Md., where they will look to earn as high a seed as possible for the April 17-19 NCVF National Championships in Denver.

"It's a big deal for us," Knepper said. "We're both super competitive, even though we show it in different ways, and we love to win. We're just trying to go out with a bang our last year."

The two players have developed a strong friendship on and off the beach and indoor courts, contributing to the team's camaraderie.

"We play together all year, so we should have a pretty good chemistry," Dejesus said.

"Sand volleyball helps us out with our agility and quickness and connections," Knepper added. "Communication is really important in volleyball and it translates over really well to the indoor game."

Rigg said personality-wise, Dejesus and Knepper are total opposites, but they complement one another.

"Gene is a casual, laid-back kind of guy," he said. "Nothing gets him too upset. Kaden's a Type A personality, a hard worker and go-getter. They've bonded well to make a perfect combination as teammates."

"Kaden leads more by his actions than his words and I really feed off of that," Dejesus added. "Watching him go out there and knowing he's going to give 100 percent every time, it's very encouraging."

Knepper is a sports psychology major with a team-high 3.98 grade-point average.

"He's very methodical, very level-headed, a real cerebral leader, and his teammates trust him," Rigg said. "He calms them down when they get too much energy or rattled, encouraging them to stop, take a deep breath, slow it down, and approach the game in a logical way."

Dejesus has the highest vertical leap on the team, reaching 11-feet, 10-inches on his approach touch.

"Gene hits over a lot of guys and he's one of our best options for sure if the pass is there," Knepper said. "He's one of the top middles in the nation and if we can get the middles going, it makes a big difference because it gives our opposites and outside guys a lot more room to swing around the block."

Knepper (437) and Dejesus (287) have also contributed more than their share of digs, showcasing quick reflexes and a willingness to dive onto the floor as they do regularly in the beach game.

Flames beach volleyball Head Coach Kaleb VanDePerre said playing in the sand has helped their court coverage and awareness as well as their power and versatility as indoor players.

"They are quicker and better from playing beach, which develops your technical skills," he said. "They are able to increase control and ramp up the speed and the power and athleticism when they go back to playing on a hard surface in the indoor game."

Dejesus' consistent passing and service-receive skills allow him to stay on the court through front- and back-row rotations.

"Beach volleyball has helped me learn how to play defense and how to block, and how to set up my frame and pass really well, too," Dejesus said.

"Gene's ball control and volleyball IQ went way higher from playing in the sand and he went from playing only in the front row to playing all around," VanDePerre added. "Kaden's aggressive indoor serve has become much more consistent from serving outside, where wind is often a factor, and his defense and reading ability and IQ have improved, too."

After placing seventh out of 18 men's tandems in last year's National Collegiate Sand Volleyball Association (NCSVA) Championships, Dejesus and Knepper plan to return to Hermosa Beach, Calif., as one of two Flames' men's duos to compete in the May 8-11 USA Volleyball Collegiate Beach Championships.