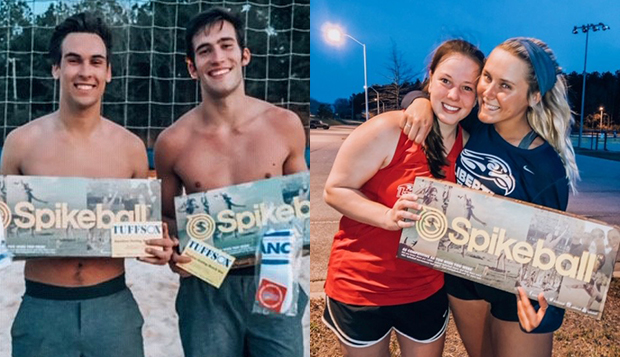 "They made some great defensive adjustments after the first game and won a lopsided second game before falling behind 7-1 in the third game and fighting back to win," Liberty Head Coach Kaleb VanDePerre said. "Overall, it is the best I have ever seen either of them play. Joel was picking up everything on defense and making it playable. Zach was a presence at the net and (remained) in great position to defend or set."

On the women's side, juniors Olivia Jensen and Sallie Robertson swept past a pair from UNC, 21-15, 21-16 in the final match.

"They clicked right away and were in control of every game pretty much throughout the day," VanDePerre said. "They served really aggressively and were able to stay in system and hit all their shots."

Liberty's gold division men's duo of senior Jacob Holbert and junior Daniel Koloff showed improvement throughout the day before falling in the quarterfinals to North Carolina.

In the silver bracket, freshman Tommy Otte and sophomore Jacob Litzau placed second, losing to a Tar Heels tandem in two games in the final.

"They played lights out in the semis to make finals and are by far our most improved pair," VanDePerre said.

Junior Alyssa Register and freshman Mare Hammersmith showed tremendous progress for the Lady Flames, finishing 3-0 in pool play before defeating teammates Rylie Rice, a senior, and sophomore Emily Lagerquist in the first round of playoffs and losing to Jenson and Robertson in the semifinals.

"All of our teams made it out of their pools," VanDePerre said, noting that there were a total of 43 teams in the tournament. "It was the best event we have had in a while as far as effort, execution and intensity."

The Lady Flames will travel to Baltimore over the weekend of April 13-14 to play Stevenson (Md.) University and Huntingdon (Ala.) College, both NCAA Division III programs.