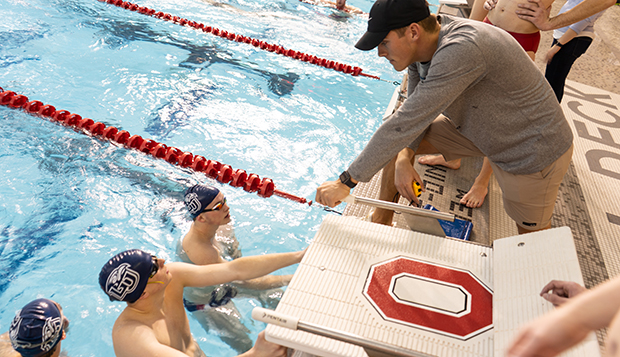 The 10 members of Liberty University's second-year men's swimming team who competed at the Collegiate Club Swimming National Championships in Columbus, Ohio, over the weekend finished 29th out of 120 schools. Close to 1,800 men's and women's swimmers participated in the three-day meet hosted by Ohio State University.

"There were more schools but fewer swimmers than last year, but the competition was much higher and the times were much faster," Flames Head Coach Heath Grishaw said. "The team grew spiritually and grew much closer together as a team, which was awesome."

"They did well and I was really pleased with the number of broken records and individual time drops we had," Grishaw said. "We met some of our goals and some we were a little off of others, but everybody dropped time which we were really excited about."

The Flames will send three members of their diving team coached by Lucas Wood to Grand Junction, Colo., for this weekend's diving national championships.