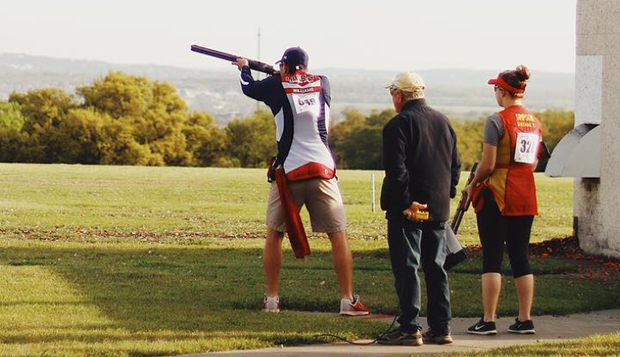 Freshman Carl Pongs fired a round of 89 to finish first out of 236 Class A contestants in the Sporting Clays division to lead Liberty University's shooting sports team at this week's ACUI Collegiate Shotgun National Championships at the National Shooting Complex in San Antonio.

Sophomore Chloe Sterner finished 16th out of 83 shooters in Sporting Clays Class B with her 73.

Junior Landon Dalton and sophomore James Bushnell placed 22nd and 24th, respectively, in the Class A competition with their rounds of 82, and junior Casey Williams finished 28th by shooting an 81.

In the American Skeet Class A competition, Liberty sophomore Jonathan Britton finished ninth out of 237 competitors with his round of 98 while freshman Elijah Labrozzi was 22nd after shooting a 96.

As a team, Liberty finished eighth out of 15 Division 2 schools with its 474 total.

Pongs finished fifth out of 207 competitors in Class A of International Skeet with his round of 88 with Dalton placing 20th and Williams 21st with identical 84 scores as Liberty placed fifth out of 13 Division 2 schools with 257 points.

Pongs also led Liberty in the Super Sporting Clays competition, finishing fourth out of 230 shooters in Class A with a round of 93 followed by junior Tommy Hartman (23rd, 88) to lead the Flames to a 10th-place team finish out of 15 Division 2 schools with 427 points.

Pongs placed 23rd out of 242 shooters in Class A of the American Trap event with his round of 96.

In the International Trap event, sophomore Liz Wesner placed seventh out of 89 competitors in the Open division with an 89 and Sterner ninth out of 67 shooters in Class B with a round of 89. Wesner also placed 31st out of 98 competitors in American Trap with her round of 93.