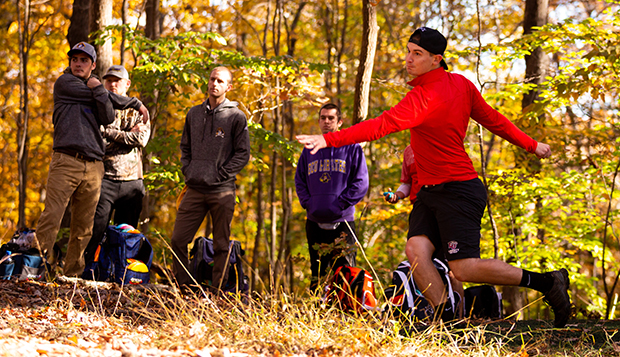 Senior Hunter Thomas follows through on a shot during the Nov. 4 Flamethrower Invitational. (Photo by Nathan Spencer)

Senior Hunter Thomas tied for third individually out of 144 players in the Championship Flight to pace Liberty University's men's disc golf team to a best-ever third-place showing out of 36 teams at the National Collegiate Disc Golf (NCDG) Championships, played Wednesday through Saturday in Appling, Ga.

"That was best showing we've ever had all the way across the board," Liberty Head Coach Steve Bowman said. The previous high Championship Flight finish was seventh in 2016. "We had two seniors and two sophomores (on the top foursome) so it is exciting to know that the future of the team is in good hands and the guys will try to take it to the next level and pursue a national championship."

The tournament was held for the first time at the International Disc Golf Center, also the host site for previous Professional Disc Golf Association (PDGA) National Championships and where the Flames won their first SouthEastern Collegiate Open (SECO) National Qualifier in late October.

Thomas shot 1-over 100 in singles play and his doubles partner, fellow senior Ryan Shumate, tied for 14th individually at 4-over 103. Sophomores Trevor Staub (7-over 75) and Pete Curran (9-over 77) didn't make the 34-player finals cut.

"Hunter had to make up some ground and finished up the second day really strong," Bowman said. "He buckled down and hit some amazing shots."

The Flames' First Flight men's team, meanwhile, finished first out of 17 teams with a five-round total of 492, two shots better than runner-up Ferris State and 19 in front of Clemson.

"We won the Second Flight at nationals in 2014, so it was nice to add a First Flight championship," Bowman said. "They led pretty much the whole weekend and stayed up on a lot of good competition."

Hannah Trotz, the only returning member of Liberty's defending women's Championship Flight title winners, tied for second individually at 13-over 111 and teamed with freshman Grace Atkins (eighth, 32-over 130) in doubles play to lead the Lady Flames (439) to a second-place showing, 15 shots behind Southern Arkansas in a field of eight two-player teams.

"Hannah was in third place going into the final round and made up five stokes," Bowman said. "The girls were in a battle all week."

Liberty's men's Second Flight team (13-over 301) held a one-shot lead going into the final round before winding up six shots behind Ferris State (7-over 295) in the five-team standings that included the Flames' fourth four-man team.