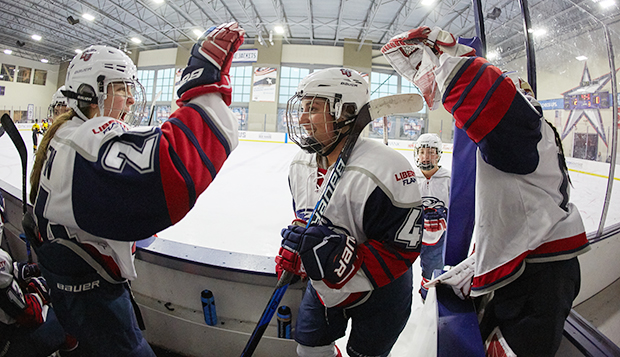 "We played a lot better in almost every area tonight," Lady Flames Head Coach Chris Lowes said, comparing the performance to Wednesday's 3-1 win over the Warriors (20-18-3). "Our energy was better and we executed better. We are happy to be moving on to the semifinals, but we are not satisfied yet and I think you'll see an even more explosive team on Saturday."

Besides Liberty (26-1-3, ranked No. 1 in ACHA DI), second-seeded Adrian and fifth-seeded Miami (Ohio) advanced to Saturday's semifinals. The fourth team was determined in Friday's third-game tie-breaker between No. 3 Lindenwood-Belleville and No. 6 Grand Valley State, won by the Lynx, 3-2 in overtime.

Against Midland, the Lady Flames held a 48-18 shot advantage for the contest and junior goalie Nadia Rupoli made 12 saves through the first two periods of shutout play.

"We played good zone defense and as a team, our defense really stood out," Lowes said. "(The Warriors are) a real solid, up-and-coming team and they took a big step in the right direction, but they didn't have the depth of talent to run four offensive lines as we did."

Liberty capitalized on a power play with 3:10 remaining in the first period to seize a 1-0 lead. Junior defenseman Dana McLeod received a pass from junior forward Vanessa DeMerchant just inside the right blue line and launched a wrist shot through traffic past Warriors goalie McKenna Gehner.

The Lady Flames killed a penalty to start the second period before junior defenseman Emily John received a pass across the slot from junior forward McKenzie Carroll in the right circle and fired a shot that deflected off Midland defenseman Tieryn Arens past Gehner for a 2-0 edge at the 15:11 mark.

Sophomore forward Shannon Fehr pounced on a loose puck that Gehner failed to squeeze after making a glove save of another long shot by McLeod. Fehr slammed the rebound into the back of the cage from point-blank range to stretch Liberty's lead to 3-0 with 8:55 left in the second period.

The Lady Flames went back on the power play and senior forward Lauren McDonald extended the advantage to 4-0 less than a minute and a half later. She took a cross-ice outlet pass from DeMerchant at her own blue line and skated the puck past two defensemen up the right wing before threading a sharp-angled shot from deep in the right circle past Gehner.

With 1:40 left in the second, Carroll lifted a shot from right in front top shelf off an assist from freshman forward Grace Machholz, who jammed the puck back to her from near the right post for a commanding 5-0 advantage.

Midland ended the shutout at the 18:24 mark of the third period when leading scorer Isabelle Uhl Chmiel chased down a long lead pass from Katherine Kihm and beat backup goalie Madeleine Snook with a one-on-one shot inside the left post.

Uhl Chmiel struck again just over five minutes later, skating the puck up the right wing on a fast break before cutting toward the goal, riding a defenseman into the crease, and flipping a backhanded shot over Snook's shoulder into the upper netting.

"She's a talented player, but we were able to keep her in check for the better part of two games," Lowes said. "From here on out, we have to be great on every shift."

McLeod helped put an end to Midland's comeback bid, assisting her third goal with 5:45 to play in the third. She took a pass from Deena Birney and unleashed a shot from the top of the left circle that Gehner blocked. But Fehr was right there to stick in the rebound with a backhanded chip shot for the final score.

The Flames' semifinal game will be played at 5 p.m. (EST) on Saturday at the Comerica Center before the championship game is set for 4 p.m. Sunday. All games in the tournament are being webcast live on the ACHA YouTube channel.