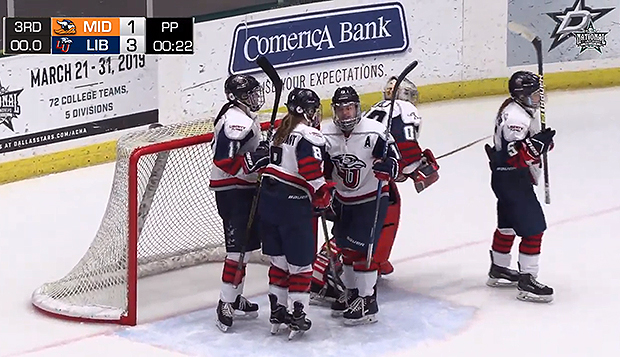 Facing Midland (Neb.) for the first time in Wednesday night's opener of the best-of-three National Championship quarterfinals, Liberty University's ACHA Division I women's hockey team established control early and outshot the Warriors 48-17 in a 3-1 triumph at the Comerica Center in Frisco, Texas.

It was the first ACHA contest for the defending national champion Lady Flames (25-1-3) since sweeping a home series against Adrian, last year's runner-up, to overtake the Bulldogs in the No. 1 spot in the ACHA DI rankings. Liberty stayed out of the penalty box for the first two periods, when it capitalized on two quality scoring chances at even strength and one out of four opportunities on the power play.

"We were super disciplined until taking two penalties in the third," Lady Flames second-year Head Coach Chris Lowes said. "To go 50 minutes without a penalty, that's a positive. Give credit to Midland as they played a tough game and took away a lot from us. And their goalie played well."

With 36.5 seconds left in the first period, Liberty junior forward Vanessa DeMerchant won a faceoff in the right circle and received a return pass from senior forward Lauren McDonald. She pivoted clockwise and sent a left-handed shot from the right crease through the five hole of Midland goalie McKenna Gehner for a 1-0 advantage.

With Liberty on a power play early in the second period, graduate defenseman C.J. Tipping launched a perimeter shot through traffic before sophomore forward Shelby Bradford chipped a cross-crease pass over Gehner's stick to freshman forward Grace Machholz, who slammed a point-blank shot in from right in front at the 17:41 mark.

After having her power-play shot in the slot blocked by Gehner (45 saves), junior forward Rachel Gibson received a deflected pass across the slot from junior defenseman Dana McLeod and fired a shot from the right slot inside the left post for a 3-0 Liberty lead with 4:58 left in the second period.

Midland (20-17-3) responded just over three minutes later when leading scorer Isabelle Uhl Chmiel sent a pass from along the back boards to Kelsey Beebe who one-timed a shot from the right crease into the top-left corner of the cage, ending the shutout bid for Lady Flames junior goalie Nadia Rupoli (16 saves).

"We gave up a couple odd-man rushes and they capitalized on one little breakdown," Lowes said. "It wasn't our best 60 minutes, but after being out of action for three or four weeks, it was a good effort and we are happy to have it. We played good team defense and did enough to get the win. We'll take it and come back (Thursday night) and try to win again."

With a victory in Game 2 on Thursday at 8 p.m. (EST), Liberty would get Friday off before beginning semifinal play on Saturday, with Sunday's championship game set for 4 p.m. (EST).

All games in the tournament are being webcast live on the ACHA YouTube channel.