Lady Flames prep for first-time match vs. Midland at nationals 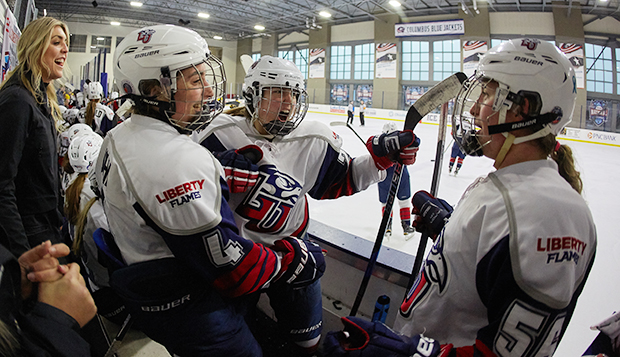 Lady Flames players get fired up on the bench before the 2018 championship win over Adrian. (Photo by Joel Coleman)

It will be the first meeting between the Lady Flames (24-1-3), who are vying for their third national title in five seasons, and the Warriors (20-16-3), who upset seventh-ranked Colorado-Boulder in double overtime in the Women's Western Collegiate Hockey League championship game to clinch their first trip to nationals since joining the ACHA in 2014.

"They are new to us, so we have to be ready for anything," Lady Flames' second-year Head Coach Chris Lowes said. "I think our girls will go into it pretty confident, having been here before and knowing what it takes to be successful."

Senior forward and leading scorer Lauren McDonald brings high expectations into her final tournament with the Lady Flames. McDonald recently became Liberty's first recipient of the Zoe Harris Award, which recognized her as the ACHA's player of the year.

"I have the confidence that we can do very well at nationals, with the girls and coaching staff that we have, but it's not going to be easy at all," McDonald said. "I have heard that Midland is a really good hockey team and we know that they're going to bring it. It's do-or-die, right? But we have the skill and the ability and the talent."

A series win over Midland would put the Lady Flames in the ACHA Final Four for the seventh year in a row with the tournament reseeded for Saturday's single-elimination semifinals.

Lowes led the team's first practice in Texas on Tuesday morning in preparation for Midland, the first test in their quest for the title.

"I like where we're at," he said. "We're a tough matchup for most teams. We're going to have to play great and be super consistent for four or five games, to dial in now and make sure that we're peaking at the right time."

Other quarterfinal matchups pit No. 5 Miami (Ohio), which won three national championships from 2014-17, against No. 4 Michigan State; No. 6 Grand Valley against No. 3 Lindenwood-Belleville; and No. 7 McKendree against No. 2 Adrian, the team Liberty defeated in last season's final.

All of this week's national tournament games are being webcast live on the ACHA's YouTube channel.