Incoming recruit Pellizzari to give Liberty depth at center 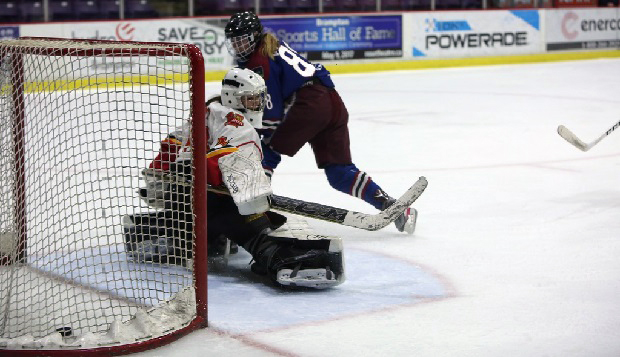 Brooke Pellizzari, a center from Brantford, Ontario, recently committed to join Liberty University's ACHA Division I women's hockey team next fall. Pellizzari scored 19 goals and distributed 31 assists in 58 games as captain of the Ancaster (Ontario) Avalanche this season and should help keep the Lady Flames — who are about to begin defense of their national championship — in contention for future titles.

"I chose Liberty because of the culture of the hockey family and their success over the years," said Pellizzari, who plans to study business administration. "I am excited to begin my journey in another country surrounded by so many wonderful people I've already met. I'm really looking forward to being part of a solid team led by a group of passionate, dedicated coaches."

Lady Flames Head Coach Chris Lowes expects Pellizzari's transition from junior-level hockey to the collegiate game in the ACHA to be smooth.

"She's going to come in right away and be effective," Lowes said. "Defensively, she is strong and able to win puck battles. Offensively, she has shown she has a good touch and possesses all the weapons and tools she needs — vision, playmaking, and shot — to be productive."

Pellizzari visited Liberty the same weekend in December as incoming recruit Julie McDonald, who she played against growing up in Canada.

"She provides great leadership, as a captain on her team, and had great references from coaches and positive reactions from teammates," Lowes said. "She epitomizes what we look for in our prospects and we are excited to have her here in the fall."

Lowes said Pellizzari, and fellow recruit Yannick Truter from British Columbia, will help fill one of the biggest needs the Lady Flames anticipate next season — at center, where Lowes has rotated in wing players this season.

"Brooke and Yannick gives us two great centermen, both captains of their respective teams and two-way players," Lowes said. "They have a lot of similarities in their makeup to (junior forwards) Vanessa DeMerchant and Deena Birney. They are strong on the puck, good skaters, and physical with high hockey IQs — the kind of players we need to win games against the top teams in the country."