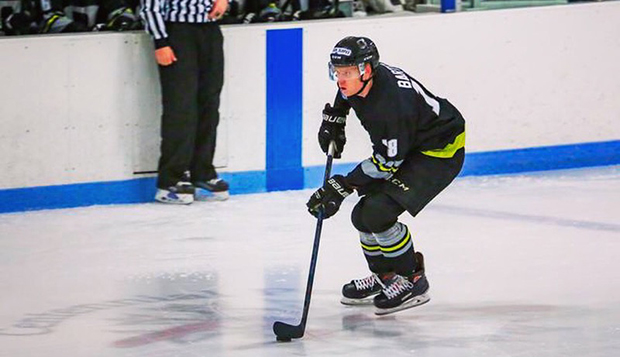 Matt Bartel will bring size and speed on the ice to the Flames' front line starting this fall. (Submitted photo)

Matt Bartel, a 6-foot, 2-inch, 205-pound center from Tampa, Fla., is the first commitment for Liberty University's ACHA Division I men's hockey team for the 2019-20 season.

After playing two seasons in the Manitoba Junior Hockey League (MJHL), earning defensive player of the year for the Dauphin Kings in 2017-18, Bartel currently is tied for first on the Western States Hockey League's (WSHL) Utah Outliers in scoring.

Bartel formerly played hockey in Florida with current Flames junior forward Brock Thompson, who encouraged him to take a look at Liberty.

"Our best recruiters are our own players," Liberty Head Coach Kirk Handy said.

Bartel made an official campus visit in late January and committed to Liberty before the Flames traveled to Frisco, Texas, to compete in the ACHA DI National Championships.

"Everything I've seen from Liberty is top-notch," Bartel said. "The campus is beautiful and the LaHaye Ice Center is awesome. When I saw the team play there, the atmosphere was unreal and I just fell in love with it."

Bartel has flourished offensively since arriving in Salt Lake City, where he scored 34 goals and distributed 37 assists to tie teammate Nick Ness for most points in regular-season action in Outliers franchise history.

"My first two years in the MJHL, I was more of a grinder and built that part of my game and learned how to play defense," Bartel said. "Coming out to Utah, I've definitely broken out this year in terms of my offense. Now I can play both, be a shut-down defensive guys and an offensive threat."

He looks forward to being reunited with Thompson and contributing to the Flames' attack.

"I've been playing at a high level for three years now and feel I will definitely be able to come in and make an impact my first season," Bartel said. "I can definitely play a physical game and I am pretty fast for my size. I am a 200-foot player. I'm good in the defensive zone and can shut teams down, but one of the best things in my game is my shot, especially from the slot."

Handy likes the diversity of skills Bartel brings to the team.

"He can do a lot of different things," he said. "He's very good on faceoffs and he's a big body who brings some of those intangibles to your program that are really going to help us out. He's someone who fits our culture at Liberty and who will be a solid addition to our program next year. He's going to have to come in and compete and earn his ice time just like everyone else."