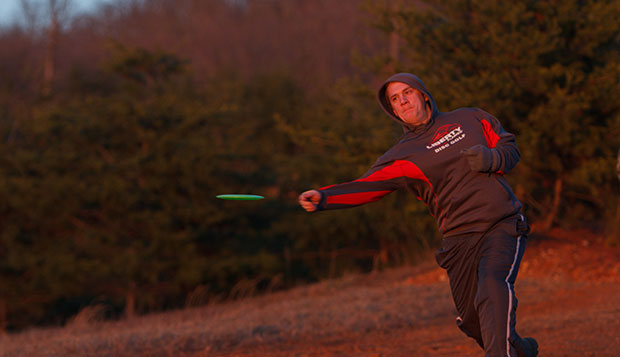 Liberty University's disc golf course opened in the fall of 2010 on a swath of land on East Campus. Since then, the area has seen rapid growth, causing the 30-acre course to be altered.

He is confident the newly revised layout will be preserved, at least for the next two years.

"The new Medical School building is going in right above us and there's a lot of things going on around there, so you never can tell where development will go next," Bowman said.

Regardless of the layout of the links, he anticipates Liberty putting its program on the map over the next few years to rank as one of the Flames' premier club sports.

"Most programs are student-run, so when the student graduates, the program stops," said Bowman, who founded the team and has designed other disc golf courses in the area. "Hopefully, we can develop a nationally-recognized organization."

Other area schools, including Randolph and Sweet Briar colleges, and Longwood and Washington & Lee universities, have built home courses in recent years and Bowman estimates there are currently 100 college teams nationwide with organized programs, a number that continues to climb.

"More and more colleges are putting courses in, which is good for (students') recreational (use) and (schools') club sports and intramural programs," Bowman said. "I'm hoping to grow the sport in the Lynchburg area, for both students and city residents."

He is working on aligning Liberty with a group of them to schedule regular competitions, as the Big South Conference does with its NCAA Division I programs.

The Flames currently are competing in an area Brawl Series, traveling to four of eight non-collegiate tournaments held at a variety of courses around Central Virginia.

Luke Laubscher and Devin Swartz finished tied for seventh out of 29 players with two-round totals of 136 at the Jan. 12 event in Rocky Mount in Franklin County, Va., before Lance Brown won the Jan. 19 meet in nearby Appomattox, which included players from Longwood and Hampden-Sydney colleges. Brown's 36-hole total score was 122 and Laubscher and Swartz tied for eighth place at 133.

Snow canceled Liberty's trip to Walnut Creek near Charlottesville, Va., on Jan. 25. Its next Brawl Series event will take place in Dublin, Va., this Saturday before the series concludes Feb. 23 on one of four courses around Bedford.

The Flames will look to secure a return trip to the April 3-7 National Collegiate Disc Golf Championships in North Augusta, S.C., by defending their title in the Liberty Flamethrower competition on March 9 and 10.

"It's one of the last (national) qualifying events," Bowman said, noting at least 10 teams are expected, including Appalachian State, UNC-Charlotte, UNC Asheville, Winthrop, West Virginia, and Penn State, as well as a few schools from Western Kentucky and Eastern Tennessee. "We have a lot of guys playing that went to nationals last year and know what it takes to get back."

Competing on their home course will be a significant factor in the Flames' favor.

"That makes a big difference," Bowman said. "Our course is hard and we play on it three or four days a week. Hopefully, that plays to our advantage, and we come into our tournament ready to go. It'll be exciting. They're looking forward to it."

Last year, Liberty placed 27th out of 42 schools at the national championships, won by Colorado.

"It was impressive to compete against schools like Oregon, Alabama, and Nebraska, and for Liberty to be in that mix," Bowman said.

This year's event will be televised on discgolfplanet.TV.