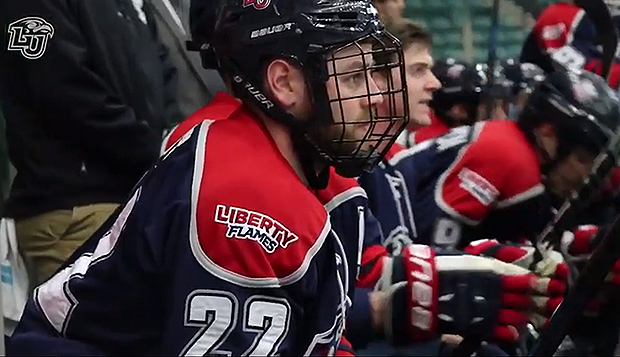 Senior forward Zak Hayes was one of six seniors to play their last game for the Flames on Sunday. (Photos by Olivia Becker)

After the top eight seeds advanced to the quarterfinals of the 20-team tournament, eighth-seeded Liberty was a decided underdog going up against the top-ranked Lions (29-1), winners of three national championships.

But the Flames (26-7-4) nearly staged the biggest upset of the tournament before their comeback bid came up just short against the Lions in a 4-3 season-ending setback.

"I felt as a program we took a giant step forward this year," Liberty Head Coach Kirk Handy said. "We were able to get to the third round of nationals which we haven't done in 10 years and we developed our players to the next level."

The Flames got on the scoreboard first with 16:11 left in the first period when junior defenseman Jacob Fricks' breakout pass from deep in his own zone ricocheted off a stick near the red line and took a strange hop past Lions goalie Cooper Seedott for a fluke 190-foot goal.

Tic-tac-toe passing from Michael Lozano to Jordan Klimovski to freshman forward Ryan Finnegan set up the Lions' leading scorer's well-placed finish from the right edge of the slot, tying it at 1-1 with 14:02 left in the first period.

Just two and a half minutes later, Vic Lombardi assisted Blair Barros on a quick two-on-one break for an open wrist shot from the left edge of the slot, giving the Lions a 2-1 lead with 11:37 left in the first.

The Flames ended the first period on a power play after Fricks was the victim of a boarding penalty in the right corner, as his brother, freshman forward Josh Fricks, had been the night before.

"There were some crazy hits there tonight and we had to battle through it," Handy said.

With 17:24 left in the second period, Lions second-leading scorer Zach Mitchell scored on a quick wrist shot off a faceoff in the right circle, beating Halpenny inside the right post.

Lindenwood netted another goal directly off a faceoff, this time with Finnegan taking the puck outside the left circle and sneaking his shot from the high slot off the glove of Halpenny inside the left post for a 4-1 advantage with 12:42 to go, prompting Liberty to bring in senior goalie Cole Burack.

"We started a little tentative and let them dictate play early," Handy said. "But as the game went on, we became stronger and we had them right where we wanted them. We spotted them a 4-1 lead and came back on the power play and pressed them hard. We really made some great headway and we had our chances."

Burack and the Flames defense killed off a penalty against a Lions power play unit that had capitalized on 38.8 percent of its opportunities this season.

The Flames were then awarded a five-minute power play after a major penalty assessed to the Lions for boarding junior forward Victor Blomberg. Cole Gammer nearly got Liberty back in the game after taking a pass from fellow sophomore forward Jordan Bochinski in the left circle. But his one-timed shot was blocked by the shoulder of Seedot, who maneuvered quickly to cover the open left side of the cage.

With 34 seconds left on the power play, Flames senior defenseman Matt Cruickshank made a diving stab at a crossing feed from junior forward Brock Thompson to stick it in from the right crease, cutting Lindenwood's lead to 4-2 with 9:39 remaining in regulation.

Just 24 seconds later, sophomore forward Devin Pierce trimmed the deficit to 4-3 by firing a laser of a shot from the left circle through a screen from Blomberg into the top right corner of the net.

After killing off a two-minute boarding penalty assessed to Cruickshank, Handy pulled Burack for the final minute of play to give the Flames an extra man. Pierce nearly set up the equalizer after Liberty dug the puck out of their corner and started a fast break the other way.

Besides goalies Burack and Halpenny, defensemen Cruickshank and Kyle Crane and forwards Zak Hayes and Zechariah Roberts were playing their last games for the Flames.

"We lose a lot of core players of this team, with six graduating seniors who meant so much to our program," Handy said. "I appreciate those guys, their attitudes and their efforts and everything they've done, all the times we battled as a group and got better. Even though we didn't get the desired results in this tournament, we put ourselves in a really good position for years to come." 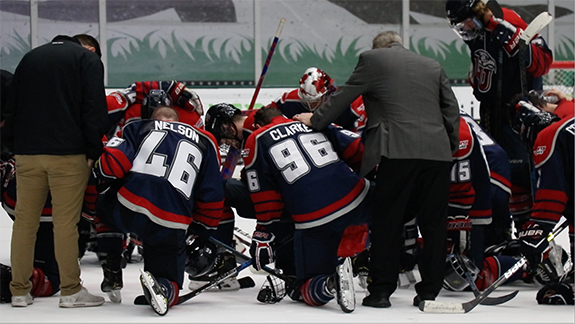