Flames pounce on Wildcats on power play; await No. 1 Lions 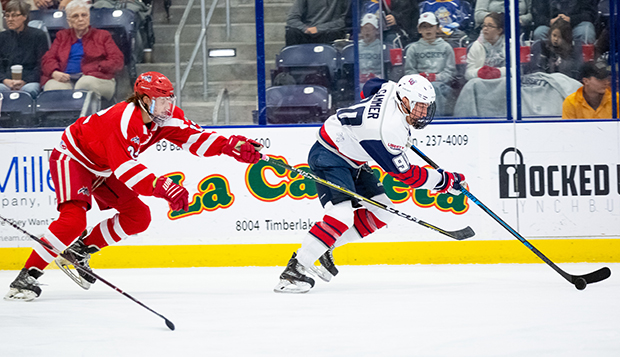 Sophomore forward Cole Gammer, shown in a game at the LaHaye Ice Center, had two assists. (Photo by Nathan Spencer)

Seven different Liberty University ACHA Division I men's hockey players scored goals as the eighth-seeded Flames advanced out of the first round at the ACHA National Championships with a 7-2 triumph over No. 9 Arizona, late Saturday night at Comerica Center in Frisco, Texas.

The Flames broke open a 1-1 game in the second period with three unanswered scores, outshooting Arizona 27-1.

Facing one of the top penalty kill teams in the country with a 91-percent success rate, the Flames capitalized on their first three power-play opportunities — scoring one goal in each period — and finished four for eight on the night.

"Our power play hadn't been all that efficient [in last weekend's ESCHL final loss] against Syracuse and today we were able to come out and execute," Handy said. "Special teams is huge in playoff hockey and we were able to cash in on that tonight."

On Saturday, the Flames stayed out of the penalty box, not giving the Wildcats a single power-play chance. Arizona was called for 11 penalties to just two for Liberty.

"I liked the way we were forechecking and we were rolling," Handy said.

Less than a minute and a half into the first period, Arizona caught the Flames' defense off guard when Josh Larson scored on a putback in the right crease after senior goalie Josh Halpenny blocked Trey Decker's point-blank shot in front for a 1-0 lead. Halpenny, who ranks sixth in ACHA DI in both goals-against average (1.82) and save percentage (93.3), got the nod for the nationals opener, and came up with several clutch saves.

In the closing seconds of the Flames' first man advantage, sophomore forward Ryan Cox netted the equalizer with 8:55 left in the first period. He received passes from junior forwards Josh Hamilton and Victor Blomberg on a quick counterattack before beating Wildcats goalie Anthony Ciurro through the five hole with a short-sided backhand from the right crease.

Arizona forward Christopher Westlund was ejected and received a five-minute major for boarding Liberty freshman forward Josh Fricks, giving the Flames a five-on-three for more than a minute and a non-releasable five-on-four for 3:45.

Sophomore forward Jordan Bochinski put away the go-ahead goal with 17:38 left in the second period, punching the rebound of junior defenseman Jacob Fricks' shot from the point into an open net.

Then, with 3:45 left in the period, sophomore forward Cole Gammer dropped a fast-break pass back to senior defenseman Basil Reynolds, who skated in and sniped a shot from the right circle bar-down past Ciurro.

Just over a minute later, Bochinski forced a steal with a forecheck and started an odd-man rush before drawing Ciurro out of position and sending a cross-crease assist to sophomore forward Devin Pierce for a one-timed finish, stretching the Flames' lead to 4-1 at the 2:34 mark.

Junior forward Quinn Ryan converted on Liberty's third power-play goal just 32 seconds into the third period, taking a pass from Gammer in the high slot and firing the puck past Ciurro top-shelf.

Senior defenseman Kyle Crane started a fast break and set up junior forward Andy Clarke with a pass into the right crease for an easy putaway and a 6-1 advantage with 6:50 to play. With the Flames back on the power play, Jacob Fricks received a feed from junior forward Brock Thompson in the slot and lifted a wrist shot inside the right post for the Flames' seventh consecutive score.

Arizona's Bayley Marshall, the third-ranked scorer in ACHA DI, ended the 56-minute scoring drought for the Wildcats with a shorthanded, top-shelf wrist shot with 2:27 remaining.