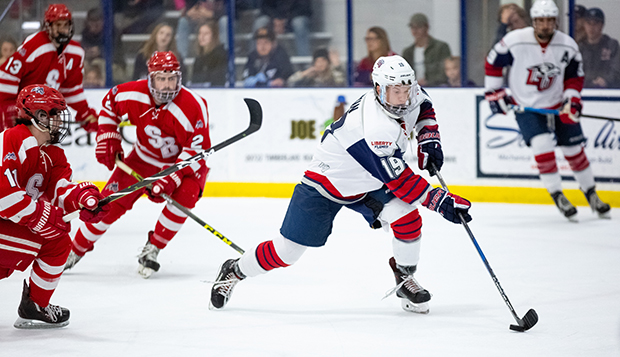 The eighth-seeded Liberty University DI men's hockey team (25-6-4) will face the ninth-seeded Arizona in Saturday's 9:30 p.m. (EST) ACHA Division I National Championships opener at Comerica Center in Frisco, Texas. This marks the Flames' 11th nationals appearance since moving up from the ACHA DII level in 2006.

Liberty holds a 9-3 advantage in the all-time series with Arizona, but the teams haven't met since splitting a home series Oct. 3-4, 2014 at the LaHaye Ice Center.

The Flames held their final two home practices on Monday and Tuesday before flying into Dallas on Wednesday. They have sharpened their execution on offense, defense, and special teams through practice sessions on Thursday and Friday at the StarCenter in nearby McKinney, Texas.

"This week has been all about refinement of our game, that's the biggest part of it," Flames Head Coach Kirk Handy said. "Our focus is on the first game, preparing to play Arizona, and we will take it one game at a time."

Liberty features only one freshman on its 23-man roster, with the rest still remembering last year's opening-round 2-1 overtime loss to then defending national champion Central Oklahoma.

"It is an older, veteran group of guys in our locker room and I truly believe they are mature and know what's ahead here in the national tournament," Handy said. "We are confident going in and we will be ready to go on Saturday night."

Arizona (31-7) is one of the ACHA's founding members and won its only national title in 1985. The Wildcats are coming off their first Western Collegiate Hockey League (WCHL) tournament championship.

Liberty clinched an autobid to nationals by winning its second consecutive Eastern States Collegiate Hockey League (ESCHL) regular-season title before being dethroned by Syracuse in double overtime in the ESCHL tournament final.

"It was a helpful reminder, playing in that one game of sudden-death, that if you lose, you're done," Handy said. "As well as we thought we played against Syracuse, we still came up short. In these one-game series, it's not necessarily the best team that wins. It's the team that's prepared and ready to go."

The Flames are vying to become the 15th different team in the 28-year history of the league — and 13th in the past 17 seasons — to capture an ACHA DI national championship. Liberty nearly upset defending national champion Adrian in their series opener in Lynchburg on Feb. 22.

"We need to play every game like we have nothing to lose," sophomore forward Devin Pierce said. "After seeing what we could do against Adrian when they came here, I think we can beat any team. When we're going and we're playing our game, our offense is really hard to stop."

With a win over Arizona, the Flames could meet top-seeded Lindenwood in Sunday's quarterfinal, also set for 9:30 p.m. (EST).

All games in the ACHA National Championships will be webcast live on the ACHA's YouTube Channel.