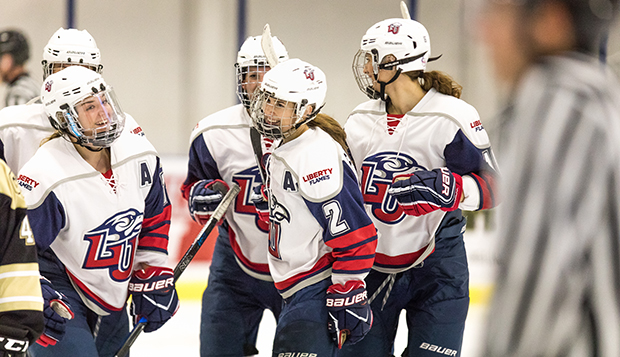 "It's really just an on-ice recognition of the league's MVP," Liberty Head Coach Chris Lowes said. "Lauren's had an awesome year and with her experience in Russia, it's a great way to really put an exclamation mark on her career."

McDonald, the Lady Flames' leading scorer for the second consecutive season, recently returned from Russia, where she and three of her teammates represented Team USA at the Winter World University Games.

"She's the fastest player in the league and she's just super talented," Lowes said. "She has become an elite scorer and finisher and has scored a lot of big goals for us. Even when she's not scoring, she brings a lot of energy to our team, and gains the respect of the rest of the league pretty easily."

"It is super cool to be recognized for an award like that and it is even more of an honor in this league, which has so many great players," McDonald added. "Every day I just come to the rink and I work as hard as I can."

The top-ranked Lady Flames (24-1-3) begin defense of their ACHA DI national championship with a best-of-three opening series against Midland (Neb.) University, starting Wednesday in Frisco, Texas. After edging Adrian, 2-1, in last year's final to win its second national title in four years, Liberty went 2-1-1 against the Bulldogs this season to overtake them at the No. 1 spot.

"All season we were ranked second and then in the final rankings we came out in first," McDonald said. "Going into nationals as the first-place team, you have a target on your back, so you have to work even harder every single game because everyone wants to take down the first-place team. It will be a challenge."