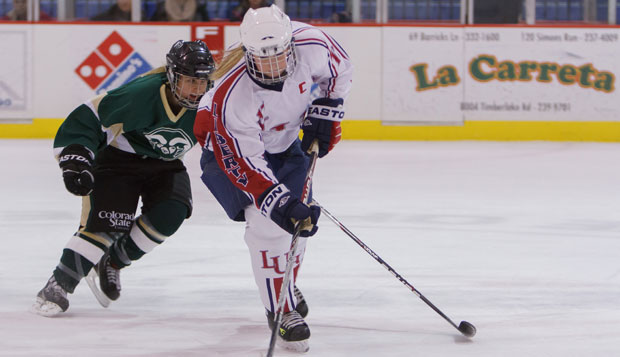 Liberty University's women's Division I hockey team retained its No. 1 national ranking in Saturday's third of four American Collegiate Hockey Association Division I polls. It is the first time the Lady Flames (21-2) have been ranked No. 1 in two consecutive polls. Liberty has held the top spot since the second ranking came out Dec. 17.

The Lady Flames received their first No. 1 ranking in Dec. 2011 but did not maintain that position in the next poll.

In voting done by the DI women's coaches, who ranked their top 15 teams based on games played through Jan. 27, Liberty received all but three first-place votes. Minnesota (11-2), which split a pair of games against the Lady Flames at Wisconsin on Nov. 16 and 17, came in at No. 2 followed by Rhode Island (18-4), which was swept by the Gophers, at No. 3.

Robert Morris-Illinois, which split two games against Liberty Jan. 18 and 19 in Chicago, is the No. 4-ranked team followed by No. 5 Massachusetts, No. 6 Michigan and No. 7 Northeastern, the defending ACHA DI national champion. Liberty knocked off Northeastern 4-3 on Oct. 14.

The fourth and final ranking will be released Feb. 23, based on games through Feb. 17, and will determine seedings for this year's DI national tournament, set for March 7-10 at the Ashburn Ice House in Loudoun County, just outside of Washington, D.C.

If the rankings stay the same, and Liberty's should since it has completed conference play, the top-seeded Lady Flames would meet No. 8 Grand Valley State in the quarterfinal round. In that scenario, ninth-ranked Ohio State and No. 10 Michigan State, the 2011 national champion, would miss the cut for the tournament.

Liberty has received bids to nationals in five of the program's first six years of existence, by finishing ranked in the top eight.

At last year's event, held in Ohio, Liberty tied Robert Morris and Minnesota in its first two games before being eliminated by Northeastern, 1-0 in the semifinals, to finish fourth, matching their final national ranking.

Injuries prevented the Lady Flames from playing their best in the postseason last year, but head coach Paul Bloomfield believes they are prepared to peak in next month's tournament.

"I feel like we're in good shape," he said. "We have some injuries, but they all should be ready to go by nationals."

The Lady Flames swept three games from 11th-ranked Colorado State over the weekend at the LaHaye Ice Center, outscoring the visiting Rams 17-1.

Liberty's defense is anchored by sophomore goalie Samantha Rupp, who has saved 93 percent of opponents' shots, posting three shutouts and boasting a goals-against average hovering around 1.00.

The Lady Flames' offense is sparked by forwards Stacey McCombe, Carrie Jickling, Carly Peleshok, and Amanda Grainger, who each have scored more than 20 points on the season.