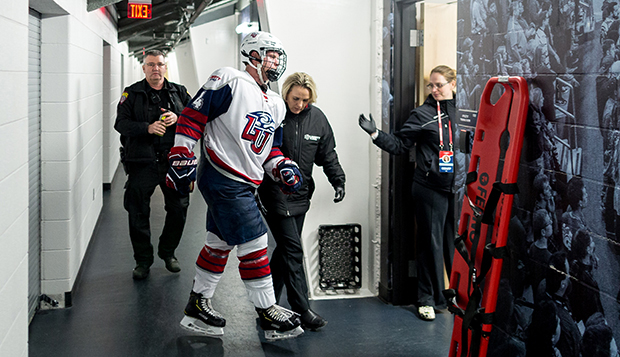 Athletic trainers working with Liberty University's 41 Club Sports programs provided more than 2,000 treatments and staffed 35 live events in February, ranking the shortest month of the year among its busiest.

"We're constantly with our student-athletes at home and away events, making sure they stay safe in these tournaments and allowing them to continue playing at their highest level," Club Sports Assistant Athletic Director for Sports Medicine Angie Witt said.

Witt and her staff includes Assistant Director Kyle Swanson and four graduate assistants, who serve an average of 20-30 hours per week.

"We are their first line of defense and whether they need chiropractic care or physical therapy care, we're the ones that make that happen on a daily basis," Witt said, noting she and her staff are also charged with helping injured student-athletes return to their respective teams. "We provide day-to-day rehabilitation for these athletes to get them back to their full potential."

"Athletic trainers as big a part of the coaching staff as anyone else," said Liberty Club Sports Athletic Director Kirk Handy, also head coach of the Flames' ACHA DI men's hockey team. "They do a fantastic job and it's often a thankless job. They are part of the unsung heroes of our staff. They are able to get our guys back quickly and they are really proactive with them."

Tiffany Campbell, who is pursuing a Master of Public Health degree, attended to the men's and women's wrestling teams at this past weekend's NCWA Grand National Championships in Allen, Texas, where the Liberty defended its men's team title and had five men's and two women's individual champions.

Tariq Kelly works as a graduate assistant working with the men's lacrosse and Ultimate teams in addition to pursuing his master's degree in business administration: healthcare management . He also works as an assistant coach for the men's swimming & diving team and will serve in dual capacities on the pool deck when the Flames travel to Ohio State for the Collegiate Club Swimming (CCS) National Championships next weekend.

Swanson traveled with the ACHA DI men's hockey team to last weekend's ESCHL Tournament in West Chester, Pa., and flew out on Wednesday to join the Flames for the ACHA DI National Championships in Frisco, Texas.

Graduate assistant Patrick Sullivan, who is pursuing a master's degree in exercise science and human performance, will travel to Texas with the reigning ACHA Division I national championship women's hockey team on Monday for their title defense from March 27-31.

The Lady Flames have had three players sidelined this season with injuries that have kept them out of action for six weeks or more.

"As a coach, having that faith that they're in good hands with a professional trained to deal with those kinds of injuries is pretty awesome," Liberty second-year DI women's Head Coach Chris Lowes said. "To know that they have their hand on the pulse of that player and are the ones interacting between the general physicians and the physical trainers and the specialists is a great relief."

While Sullivan followed the DI women's team everywhere they played throughout the season, Witt and Swanson covered home games and split trips with the DI men's team. Julianne Purves, a graduate assistant studying for a master's in human performance: strength and conditioning, traveled with the men's Division II team.

"I've been shocked at how many concussions take place in the women's game, even though it's a ‘non-contact sport,' compared to the men's game which is full contact," said Lowes, who previously coached the men's DII team for nine seasons. "We are fortunate at Liberty that we get dedicated athletic trainers who get to know our players and treat and comfort them at the moment of injury until they're fully recovered." 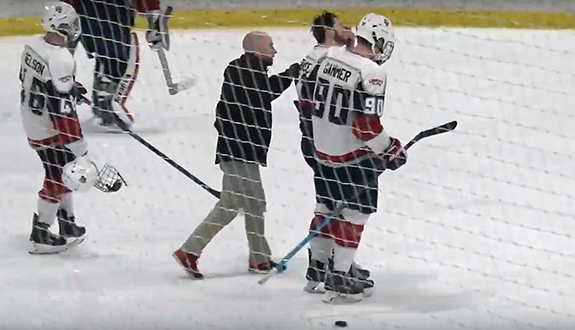