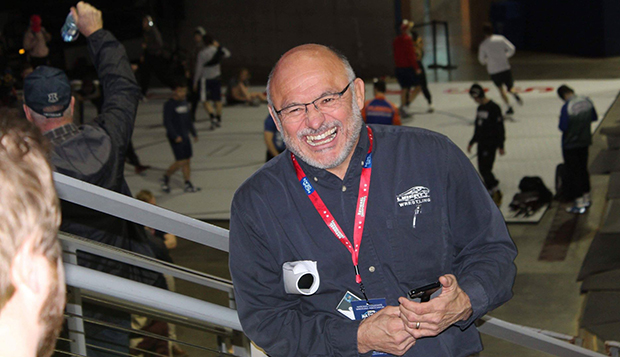 Jesse Castro, in his 14th season as head coach of a program that is in its eighth year competing in the NCWA, was named NCWA Coach of the Year for the first time. He guided the Flames to title defenses in both the NCWA National Duals, Jan. 25-26 in Mesquite, Nev., and the Grand National Championships.

"It is always an honor when you are recognized by your colleagues," said Castro, who was enshrined into the Liberty Athletics Hall of Fame in 2012 and received the National Wrestling Hall of Fame Lifetime Service Award in 2017. "I know that it's the guys on the team that are the ones who were doing the work. They have a way of making coaches look good."

Liberty was also designated as the NCWA All-Academic Team Champion, based on the average accumulative grade-point average (GPA) of the Flames' top eight student-athletes.

"I don't think we've cracked the top 10 before," Castro said. "That bodes well for our team, that we're not just winning national championships but also excelling off the mat in the classroom."

He credited Club Sports Director of Academic Development Sarah Kelly and Assistant Director Donna Holland and their staff for providing his student-athletes with the academic advising they need, in addition to scheduling study halls and tutoring sessions.

In Texas, the Flames sent five wrestlers to the finals for the third time, but had never before won more than two individual titles. On Saturday, all five prevailed and Liberty had 11 All-Americans out of the 15 that qualified for nationals.

"It's always a thrill to win a national championship," Castro said. "The way they did it was exciting to me. That was incredible, unprecedented."

Castro said his assistant coaches all played significant roles in leading the Flames to the title and thanked Club Sports Coordinator of Strength & Conditioning Chris Kerr for consistently pushing his wrestlers in workouts throughout the year.

He said keeping his team focused on the prize for the glory of God has been the secret to his success.

"That's always the challenge of coaching, and part of our core values, that ‘Whatever you do, you do it unto the Lord and not unto men,'" Castro said. "Our emphasis going into Saturday's finals was to wrestle freely. It was the Lord that brought us here and the Lord who was going to bring us home, one match at a time."