Flames rally to down Delaware in ESCHL semifinals, 3-2 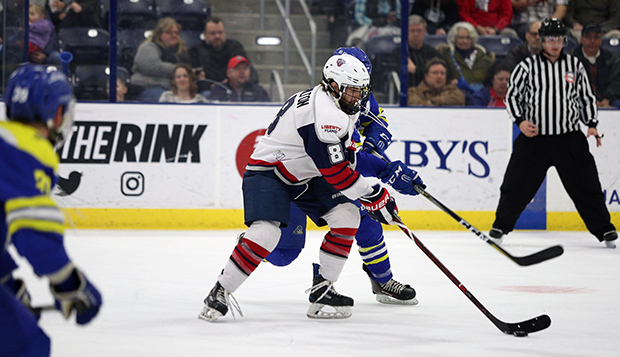 The two-time-defending ESCHL champion Flames (25-6-3) beat the Blue Hens (16-16) for the fifth time in as many tries this season.

"It's tough to beat a team five times in one year and I'm proud of the guys for coming back to win tonight," Liberty Head Coach Kirk Handy said. "It's a good opportunity for us to play in the championship game and we're looking forward to it."

Liberty will take on third-seeded Syracuse (17-10) — a 3-2 overtime winner over second-seeded Stony Brook (20-10) in Saturday's second semifinal — in Sunday's championship game, set for 1:30 p.m. Liberty went 3-0-1 against the Orange this season, winning the last three after dropping the Oct. 12 opener in overtime in Lynchburg.

Delaware — which upset fourth-seeded Rhode Island (20-14), 6-1, in Friday's first-round game — finished a power-play goal on the last of multiple shots from point-blank range to seize a 1-0 lead with 7:46 left in the first period, when the Blue Hens outshot the Flames, 19-13.

"In the first period, we looked flat and it was definitely tough to get our legs moving," Handy said. "In the second and third periods, we played a lot better."

Liberty senior goalie Josh Halpenny made a spectacular glove save of a one-on-one shot just over five minutes into the second period before the Blue Hens scored on a counterattack with 12:15 left in the stanza, doubling their lead to 2-0.

Less than a minute later, junior forward Quinn Ryan capitalized on the Flames' first power play to trim Delaware's advantage to 2-1 on a putback with 11:24 to play in the second period.

Just over 10 minutes later, Roberts netted the equalizer by tipping in a shot by junior defenseman Matt Cruickshank, who trapped a pass from junior forward Josh Hamilton in the slot before firing a shot toward the top right corner of the cage.

After junior defenseman Jacob Fricks put a shot on net from the top of the right circle, Roberts lifted Liberty to the 3-2 lead it would not relinquish by cashing in on the rebound of Hamilton's shot as Roberts skated across the slot with 17:56 remaining in regulation.

"Roberts was in the right place at the right time to score two big goals for us tonight," Handy said. "He's a key player for our team on and off the ice."

The Flames outshot Delaware by a 46-28 margin and Halpenny improved to 9-2 on the year by making 26 saves, shutting out the Blue Hens out for the final 32 minutes of play.

"Halpenny played a really great game today and was solid for us the whole night," Handy said.