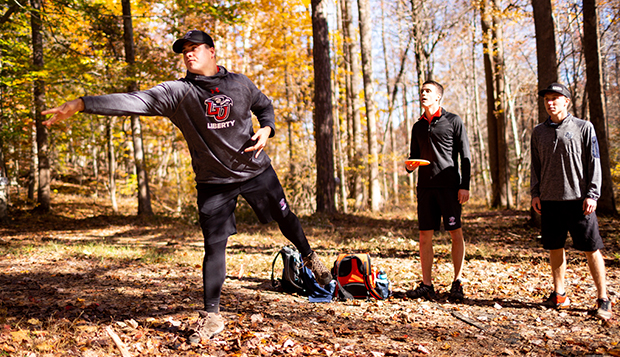 Freshman Dustin Barrett tees off at the Flamethrower national qualifier in November. (Photo by Nathan Spencer)

Liberty's top two teams also finished four shots in front of Clemson and Augusta, which tied for fourth at 349, and five in front of East Carolina and North Carolina State, which shared sixth place with 350 totals.

"I was proud of how the guys played, with two players from our first flight (Bamford and Miekley) and two from our second flight (Barrett and Thayer) combining to tie our championship flight after three rounds of competition (two doubles, one singles)," Liberty Head Coach Steve Bowman said.

Bamford tied for second place individually out of 63 players with his 5-under-par 54 round of singles while Shumate paced the championship flight and tied for eighth overall with his 3-under 56. Curran finished in a five-way tie for 17th with his round of 1-over 60.

"That was their first tournament so it was a good experience for them," Bowman said. "Clemson's girls helped teach and instruct enough that it was a friendly environment for them."

"The program is growing strong and it is exciting to see the players' development," Bowman said. If they can put it all together that weekend, they all should do well and have good opportunities."