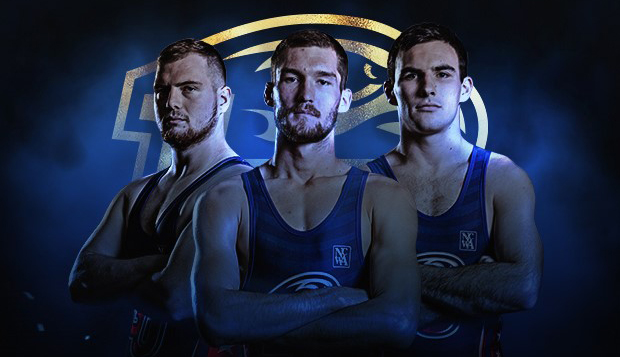 "We're always training together and beating each other up, pushing ourselves and making each other better," said Amos, the reigning 235-pound national champion. "Sometimes, there can be some sparks flying in the practice room, with guys getting a little agitated. But once we get out there on that mat in the tournament, we're all together and we've got each other's back."

Johnson, a two-time All American at heavyweight, said the relationships formed between teammates across all weight classes have become stronger in recent seasons.

"The team is a lot closer as a group with more connections on a friendship level," he said. "My sophomore year, we were more a bunch of individuals who were competing together. Starting last year and especially this year, there's been a lot more group cohesion and a camaraderie that's developed."

McIlhenny, who wrestles at 184 pounds, said that bond is what has helped set the Flames apart.

"Honestly, our biggest strength as a team is how much of a family we are," he said. "When you step out on that mat, it's not like, ‘I'm winning this match for me.' You want to do it for all of the guys that are cheering you on. … Ultimately, we want to bring glory to the Lord, through our actions and how we carry ourselves through victory and defeat."

He said that sense of loyalty and devotion extends to each team member, who are all equally valuable.

"Every single person plays an extremely significant role and I think it's a good representation of how the body of Christ works," he said. "Not everyone is the national champ, but you are going to be the guy that scores points and keeps going when he's injured. It encourages people to say, ‘I'm giving it my all no matter what the situation.'"

Johnson said the senior captains are more than willing to carry their own weight, and bear the burdens of their teammates in pressure situations, with matches and tournaments on the line.

"We know that we're the block that has to take the team on our shoulders a lot of matches," he said. "We're the ones in those upper four or five weight classes where the team depends on us to win."

Liberty will enter 15 wrestlers into this week's NCWA Grand National Championships in Allen, Texas, as the favorite to defend its title and win for the third time in five seasons.

"We're kind of a respect-all, fear-none program," said Amos, whose last-second heroics lifted the Flames over Apprentice by one-half point in the final team standings at last year's Grand Nationals . "We understand that there are going to be challenges ahead of us, but we also understand that we're pretty good, too. We're going in there and we're going to be ready to wrestle and to defend our title."

Last Saturday at the LaHaye Multipurpose Center, the Flames had 10 finalists and seven champions to edge top-ranked Apprentice, 203-193.5, for their eighth straight Mid-Atlantic Conference Tournament crown.

Amos, who dropped to 197 pounds this season to make room for Jeffrey Allen, a transfer from Virginia Tech, was pinned by Apprentice's Ross Graham, the reigning 197-pound national champion, accounting for Liberty's only MAC championship finals loss other than two forfeits to teammates.

At the Jan. 26 NCWA National Duals near Las Vegas, Allen's 14-2 major decision over Graham at 235 pounds in the final dual match helped Liberty overcome an early 15-0 deficit to beat the Builders, 28-18, for its fourth National Duals championship as an NCWA program and first team title defense in tournament history. That gave the Flames a 20-point bonus to take into this weekend's event in Texas.

"Ever since I've been here, we've always been a top-heavy team," Amos said. "Once we get the ball rolling a little bit, we're really strong. It's all about momentum. It can be challenging sometimes going down a couple matches at the beginning, but I know once a certain point in the lineup hits, we're going to start coming back and it's going to be OK. All the guys know that — just to trust the process, trust that the upperweight guys are going to get the job done."