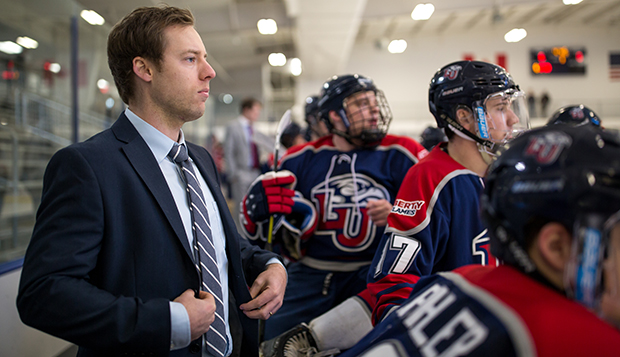 Flames Head Coach Jared Smith peers from the bench in a recent game at the LaHaye Ice Center. (Photo by Joel Isimeme)

After waiting out a tornado warning during the second intermission, the Flames (15-5-3) upset fifth-seeded Ole Miss (19-2-2), 3-0, in Saturday's first round before falling to third-seeded Tampa, 3-2 in overtime, on Sunday. The four South Region national qualifiers for the March 26-31 ACHA DIII National Championships in Frisco, Texas, are all from Florida: Tampa, Central Florida, Florida Gulf Coast, and South Florida.

"It was an unreal weekend, the best hockey we played all season," Liberty first-year Head Coach Jared Smith said. "It was an awesome run and good to prove to ourselves that we are capable of playing with these teams ranked in the top five."

Liberty opened a 2-0 first-period lead on the Spartans (19-8-4), who had ousted South Carolina, 9-5, in their first-round contest, before allowing Tampa to score three unanswered goals over the final 50 minutes.

"We just prepared well in the locker room and we were ready to roll," Jared Smith said. "We had a really good start and maybe caught Tampa off guard. They were a really good team."

The Spartans pulled within 2-1 on a goal by Eric Pedro with three minutes left in the first period before fellow forward Stephen Buck tied the game three minutes into the second.

A minute and a half into the first 20-minute sudden-death overtime, Tampa scored the game-winning goal on a tip-in of an outside shot from deep in the slot over the glove of Flames senior goalie Derek Guzik.

"It was a pretty goal by them," Smith said. "It was a heartbreaker for us."

Guzik, who made several clutch saves in the shutout of Ole Miss, played every minute against the Spartans and helped keep the Flames in contention.

"This was the best run we've had at regionals and we can definitely build on it," Smith said.