Seedings set for Liberty's 19 wrestlers at nationals in Texas 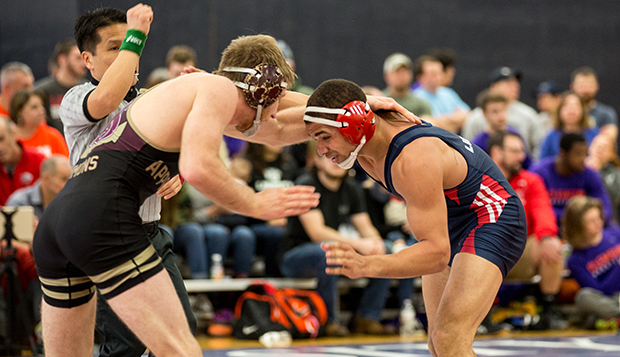 Liberty University's wrestling team, the reigning NCWA Grand National champion, has eight of its 15 individual national qualifiers seeded in the top three of their respective weight classes after seedings were announced with a live drawing on Sunday.

The two-time defending NCWA National Duals champion Flames will take 20 points from their Jan. 26 team triumph in Mesquite, Nev., into this week's national championships, set for Thursday through Saturday at the Allen Events Center in Allen, Texas, where they will try to claim their third title in the past five seasons.

"We not necessarily going to defend anything," Liberty Head Coach Jesse Castro said. "We're going to go take it. We don't want to be in defensive mode — we want to stay on attack."

Liberty — which had seven individual champions and 14 top-five finishers in winning its eighth consecutive Mid-Atlantic Conference (MAC) tournament championship, March 2 at the LaHaye Multipurpose Center — will have six returning All-Americans (top-eight finishes) in action this weekend.

At 197 pounds, Liberty senior co-captain Austin Amos (34-4) is the reigning 235-pound NCWA national champion, but is seeded second behind Apprentice's defending 197-pound champion Ross Graham, who won their first meeting in the MAC final. Amos will receive a first-round bye before facing 31st-seeded Oliver Feagin from Rensselaer Polytechnic Institute in the second round. Flames freshman Josiah Murphy (9-13), seeded 29th, will also get a first-round bye and challenge fourth-seeded George Hargrove from Springfield Technical Community College in the second round.

Sophomore Jeffrey Allen (33-7) is Liberty's lone No. 1 seed at 235 pounds, where he will wrestle Washington State's 32nd-seeded Alec Palander following a first-round bye. Graduate David Smith (11-4) is seeded 15th with a bye and set for a second-round test against Houston Downtown's Nicholas Emery (No. 18).

Flames senior co-captain Josh McIlhenny (28-11), another returning All-American, is seeded second at 184 pounds and will wrestle Grays Harbor College's No. 31-seeded Kyle Ignacio in the second round.

At 165, Liberty returning All-American junior Luke Ely (11-10) is seeded third and will receive a first-round bye before facing Richland College's 30th-seeded Izaiah Salazar in the second round.

At 157 pounds, junior Andrew Burgette (29-6), a returning All-American, is seeded third and will face Akron's 62nd-seeded John Iacano in his first-round match while freshman Edmond DeAngelis (6-5) is seeded 56th and will challenge No. 9 Dan Ritz of Penn State World Campus.

Junior Sam Karel (16-8), another All-American last year, is seeded third at 174 pounds and will receive a first-round bye before facing Rutgers' 30th-seeded Anthony Tamayo. Meanwhile, Flames senior and MAC runner-up Cody Richmond (14-11) is seeded 12th and will wrestle Montana's 52nd-seeded Elmer Fajardo in the first round.

At 149, Flames sophomore Chad Cantrell (26-7) is seeded fourth and will receive a bye before facing the winner between No. 29 Johnathan Dickerson and No. 36 Ryan Williams in the second round.

In the women's brackets, the Liberty will feature four wrestlers, including junior, two-time-defending national champion Cendall Manley at 170 pounds, where she is seeded first and will meet 16th-seeded Lindsey Rittimann from Schreiner in the first round of the 11-wrestler bracket. Her older sister, graduate Charisse Manley, is seeded first at 143 and will face Florida State's Jazlyn Villalona in the semifinals of the four-wrestler bracket. Lady Flames junior Jayla Ware will make her nationals debut at 109 pounds, where she will be seeded 10th and challenge seventh-seeded Hannah Ung from Rhode Island in the first round. Finally, at 155 pounds, sophomore Catherine Morales will make a second trip to nationals as the 12th seed and take on PLU's fifth-seeded Tatiana Molinero-Ceras in the first round.