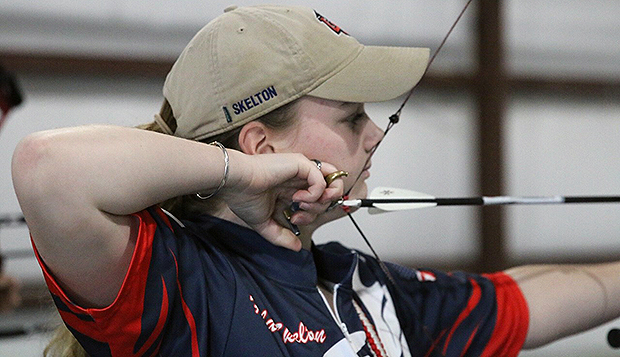 After regional results were tabulated into the USA Archery Collegiate Indoor National Championship standings, four of Liberty University's archers earned Academic All-American status for finishing in the top 25 percent of their respective divisions and maintaining a grade-point average of 3.5 or better.

"Having four archers with that title is a win in itself," Flames Head Coach Ian Rigney said, noting there were a total of 576 archers that competed at 13 different regional venues.

Boyd won the indoor national championship in men's bowhunting last spring in Las Vegas in his first time competing indoors. He was part of the Flames' winning men's bowhunting team at the USCA 3D National Championships in Illinois the previous fall.

"He's a senior but he has three more years of eligibility because he started as a junior," Rigney said. "He will probably will still be competing next year because he will be working his master's degree through the School of Divinity."

Rigney is planning to take a team of seven men's and women's archers to compete in the recurve, compound, bowhunter, and barebow divisions USA Collegiate Archery Outdoor Collegiate Target Nationals, May 17-19 in Dublin, Ohio.

"That will be a completely new ballgame, because whereas in indoors the range is 18 meters or 20 yards, in outdoors, it is 55 yards and you are shooting five arrows at a time at a target the size of the bottom of a Coke can."