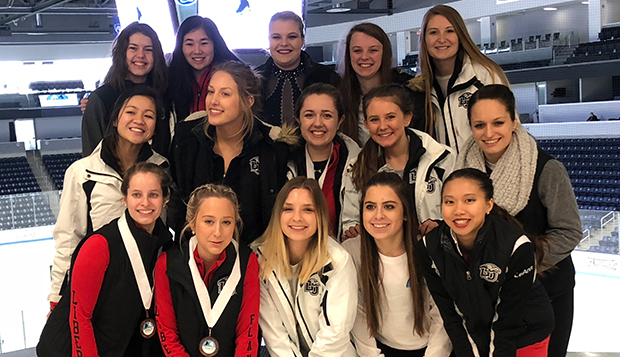 With its 45 points on Saturday, the Lady Flames finished in ninth place overall with 161 points in the three competitions. Liberty placed eighth at New York University on Nov. 3-4 and 10th at MIT on Feb. 1-3.

Individually at Penn State, the Lady Flames were led by Jill Holste, who finished first in Solo Preliminary dance; freshman Hannah Walker, who took second in the Excel High Beginner division; sophomore Haley Gram, who was runner-up in the Excel Juvenile Plus category; freshman Elaina Baker, who placed third in Excel High Beginner; freshman Aviana Dettmer, who took third in Excel Pre-Juvenile Plus; and the Low Team Maneuvers quartet of Gram, Dettmer, junior Christa Lesher, and Walker who came in third overall.

It was the last competition for three of Liberty's graduating seniors — LeAnn Fung, Megan Gonzalez, and Chelsea Henry. The Lady Flames' other two seniors, Katherine Thacker and Catherine Bredshall, missed the competition to skate with the Lady Flames' synchronized skating team at Saturday's U.S. Collegiate Championships in Michigan.

"We are ending the year on a high note and we can only remain optimistic in moving forward to next season with about 10 promising recruits coming in next fall that are eager to be part of the team," Liberty Head Coach Dawn Harter said.

The Lady Flames will host recruiting events over the April 4-7 College For A Weekend (CFAW) and have several skaters perform in the annual PraiseFest, a movie-themed event set for April 27 at 7 p.m.