Lady Flames prep for nationals by winning battles with Pride 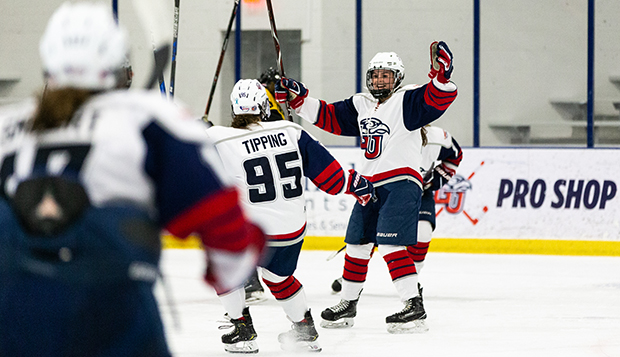 As a final tune-up before defending its title at the March 27-31 National Championships in Frisco, Texas, Liberty University's ACHA Division I women's hockey team traveled to Rockville, Md., and swept an exhibition series against the Washington Pride U19 team over the weekend. The Lady Flames rallied from a 2-1 third-period deficit to take Saturday's opener, 4-2, and let a 4-0 first-period lead slip away before pulling out Sunday's rematch, 5-4 in overtime.

Liberty — which finished the regular season with a 24-1-3 record and at No. 1 in the ACHA DI national rankings — had swept the Pride Sept. 8-9 at the LaHaye Ice Center.

"It was a good weekend to build chemistry," Lady Flames Head Coach Chris Lowes said. "Washington's a good team. They give us a good battle. It was fast and physical hockey and they were both tight games so the girls got to test their competitive level playing in another foreign rink on the road."

Liberty's bench was depleted for the series, competing without forwards Lauren McDonald, Shelby Bradford, and Vanessa DeMerchant as well as defenseman Dana McLeod, who are representing Team USA at the Winter World University Games in Russia.

"Obviously, we were short-staffed, but our players got lots of touches and it was a really good conditioning skate for most of our team," Lowes said. "It accomplishes our goal of breaking up the monotony of practice and gets their competitive juices flowing for nationals."

The Lady Flames will take a few days off from practices over spring break next week before the four players in Russia return and for a final two weeks of preparations for nationals. Liberty will leave March 24 to have two days of practice at the Dr. Pepper Arena before opening tournament play with a best-of-three series against eighth-seeded Midland (Neb.), which upset seventh-ranked Colorado in the Western Women's Collegiate Hockey League (WWCHL) tournament championship to earn the autobid to nationals.

"They're a solid team and we're not going to take them lightly," Lowes said. "This will be their first trip to nationals so they're going to be super excited and motivated and we've got to be ready to match that energy."