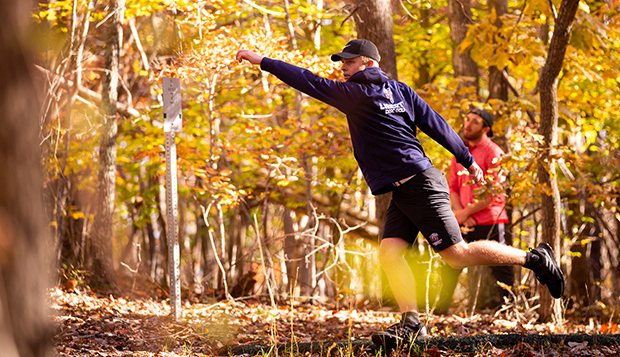 Liberty sophomore Trevor Staub follows through on a drive at the Flamethrower national qualifier. (Photo by Nathan Spencer)

Liberty University's disc golf team placed its championship and first flight men's foursomes in the top 10 out of 19 teams in the advanced division at the North Carolina State Wolfpack Qualifier over the weekend of Feb. 23-24.

The Flames' championship flight quartet of seniors Hunter Thomas (1-under-par) and Ryan Shumate (1-over) and sophomores Trevor Staub (1-over) and Pete Curran totaled a 3-under 343 through five rounds of singles and doubles play to tie for third with Virginia Tech. They finished behind only NC State's A team (336) and Georgia Southern (341).

Liberty's first flight, led by freshman Evan Bamford (4-over), finished in a three-way tie for seventh place at 364 with Clemson's A team and NC State's B squad.

"We got lots of practice playing in the rain," Flames Assistant Coach Devin Swartz said. "Hopefully, we don't have it at nationals, but if we do, it was good experience."

Senior Hannah Trotz is the lone returning player from that team and will be paired with freshman Grace Adkins at nationals in a new format for the women's tournament that will feature one round of singles play and four rounds of doubles. Two other Lady Flames tandems will be senior Hannah Frey and Hons and freshmen Mackenzie Patrick and Hayes.

"They're trying to get more teams and balance it out to make it a little more challenging," Liberty Head Coach Steve Bowman said.