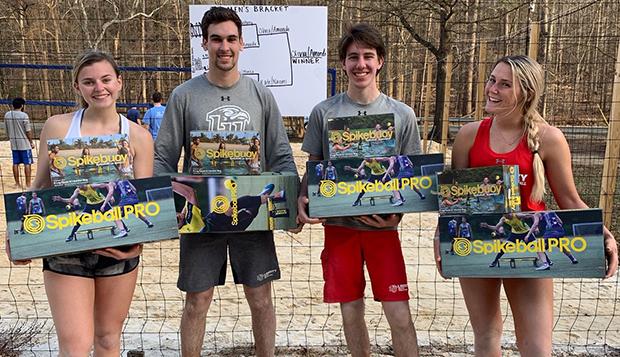 "It was a big weekend for the first event of the year," said Liberty Head Coach Kaleb VanDePerre, who brought three women's pairs and two men's duos to the tournament. "We are proud that both teams that made the playoffs ended up on top for the day."

The men's bracket featured 10 teams and the women's division had a total of 17 from Bloomsburg (Pa.), Liberty, North Carolina State, UNC, and UNC Wilmington.

Gooch and Slaughter went 4-0 in pool play to earn the No. 1 overall seed into the playoffs, where they eventually defeated a tandem from North Carolina State in the finals.

"Joel was coming off of a shoulder injury so it was great to see him tough it out and win," VanDePerre said. "The two of them found ways to make each other better and string together a few runs each game to come out on top."

On the women's side, Lyons and Jensen split their first match of the day against host UNC before finding chemistry on the court and finishing first in their pool. In the playoffs, they defeated North Carolina State in the semifinals before rallying from a one-game deficit to win the rematch with the Tar Heels in the championship match, 2-1.

"Amanda's offense was solid throughout the day," VanDePerre said. "She was swinging and scoring well. UNC made us adjust a lot in the finals because their short shots were scoring a ton of points. Once we were able to pick up and score on a few of those, it helped boost our confidence and put us over the edge to win."

Freshman Mare Hammersmith and sophomore Alyssa Register went 5-3 in pool play and freshman Jenae Baker and senior Ashlyn Whitt finished 3-3 to place third in their pool, barely missing the cut for the playoffs.

"We've got a lot of work to do before our next NCSVA event at NC State on March 30, but it was great to see the indoor work we've done in the cold months pay off," VanDePerre said.