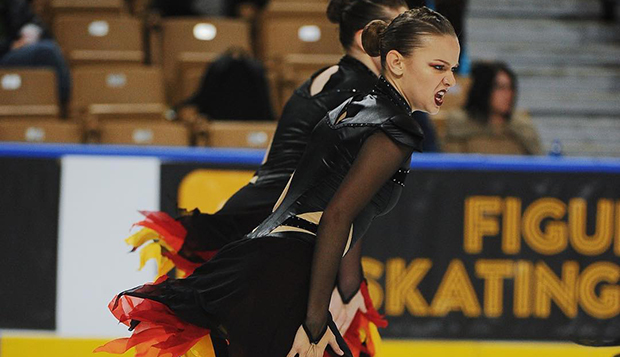 Liberty defeated UMass, one of the teams that placed ahead of it at the Feb. 1-2 Eastern Sectionals in Worchester, Mass., and Notre Dame, as it had at the Dec. 1 Dr. Porter Classic in Ann Arbor, Mich.

"We definitely surpassed where we were last year, when we placed ninth out of 10 teams," Liberty Head Coach Tatiana Payne said. "We encouraged and challenged the girls to focus on doing their own personal best at nationals, knowing we were not there to get a medal, but to represent our school and God. They went out there and skated really well and it was a big success for our team to see where we are as a program."

The Lady Flames revised their three-and-a-half-minute program, choreographed to soundtracks from the "Hunger Games" movies, since their last official performance, changing their intersection elements from a whip to a triangle transition.

"Once we got our scores back, it was good that we were able to see the benefit of the changes we had made in the program after sectionals," Liberty Assistant Coach Emily Halvorson said.

"The girls really went out there and did their best performances, skating very clean and very dramatic, and the judges really liked the composition and interpretation of our music and choreography, where our scores were the highest that we've seen," Payne added.

After hosting a recruitment event over College For A Weekend (CFAW) from April 4-7, Liberty will perform its routine once more at its annual PraiseFest, a movie-themed event set for April 27 at 7 p.m.