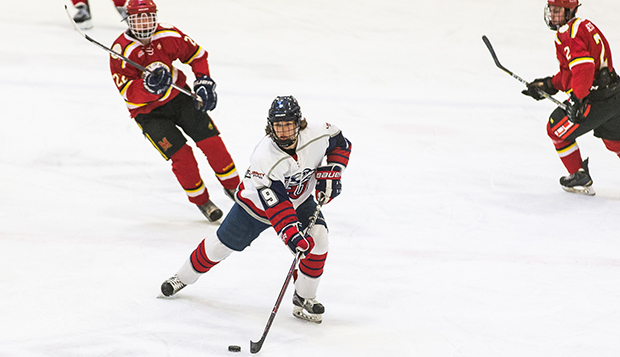 Seeded third and hosting the Southeast Regional tournament, Liberty University's ACHA DII men's hockey team had its hopes of returning to the National Championships for a sixth consecutive season dashed by eighth-seeded North Carolina State with a 4-1 second-round setback Sunday at the LaHaye Ice Center.

"It was a tough battle, and a tough loss, for sure," Flames senior defenseman Drew Crilly said. "They were a really good team, really good offensively, and I think we underestimated that."

After a scoreless first period, NC State (27-0) seized a 1-0 lead on a power play goal by Sam Banasiewicz less than four minutes into the second.

The Flames (22-7) netted the equalizer at the 17:42 mark of the third when Crilly sent a stretch pass to sophomore forward Blake Flanders who weaved through traffic and unleashed a shot from the high slot that flipped off the glove of Wolfpack goalie Joey Hall and landed behind him. Freshman center Timothy Doe crashed the cage and powered the puck across the goal line, knotting the contest at 1-1.

But NC State needed less than four minutes to reclaim a 2-1 lead with a shorthanded score when Alex Robinson intercepted a clearing pass and wrapped the puck around Liberty sophomore goalie Adam Partridge.

Liberty applied persistent pressure on its next power play opportunity, but senior right wing Matthew Perri's shot from the top of the right circle sailed just over the crossbar and Hall gloved sophomore defenseman Alex Norwinski's slapshot from the high slot.

Parker Szarek all but iced the win for the Wolfpack by cleaning up a loose puck in the left crease with 4:27 remaining in regulation before an empty-netter with 1:30 to play accounted for the final score.

In Saturday morning's first round matchup with New Jersey, Liberty broke open a 2-1 game with four unanswered goals in the third period, including two by Perri, for a 6-1 win.

"This team's definitely going to keep getting better," said Crilly, the Flames' leading scorer with 12 goals and 26 assists on the season. "We have a solid core of good young players. It'll be nice watching them."