Seniors step up to help Flames complete sweep of Alabama 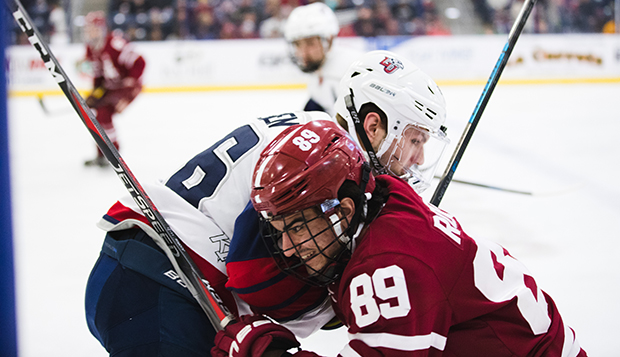 On a night when Liberty University's ACHA Division I men's hockey team honored its six seniors playing their final game at the LaHaye Ice Center, it was only fitting that two of them scored the Flames' first and last goals in a 6-2 victory over Alabama that completed a series sweep.

Sophomore forward Cole Gammer assisted the Flames' first two goals on Saturday. On the first, he received an outlet pass from junior defenseman Jacob Fricks and skated the puck up the right wing before sending a pass to senior forward Zechariah Roberts, who finished past Alabama goalie Garret Kingsbury with 12:23 left in the first period. It was Roberts' third goal in two games after missing nearly four months with an injury.

"That was a gift from Gammer; he should have put a bow on it," said Roberts, who was filling in for junior forward Quinn Ryan on the Flames' top line. "It's so nice playing with guys of that caliber, with Gammer and Brock (Thompson). That was all them, a lot of hard work as a line."

Alabama evened the score with 1:05 left in the first when forward Jeremy Hannah lifted a wrist shot past Burack into the upper netting.

At the midpoint of the contest, Fricks controlled the puck at the left side of the blue line and skated around a Frozen Tide defenseman before netting the go-ahead goal with an uncontested wrist shot in the left crease for a 2-1 lead with 9:59 to play in the second period.

Just over three minutes into the third period, Flames sophomore forward Devin Pierce stretched Liberty's lead to 3-1 by taking an outlet pass from Burack up the right wing and maneuvering the puck around two Alabama players before lifting a sharp-angled shot past Kingsbury, barely under the crossbar and off the upper netting.

Alabama trimmed the deficit to 4-2 when defenseman Caelan Briere skated across the slot and fired a shot past Burack into the left side of the net with 3:13 remaining in regulation.

Flames junior defenseman Chaydan Lauber answered with an empty-netter at the 35-second mark before senior forward Kyle Crane, skating through the right crease, redirected junior defenseman Basil Reynolds' shot from the point into the back of the net at the buzzer.

"It's a memory I'll never forget, quite honestly, every time I think back about Liberty Hockey," said Crane, whose teammates celebrated with him behind the cage and along the bench. "It's a highlight of my career. I was so exciting and emotional, it brought me to tears."

Crane may shift back to defense when the two-time defending champion Flames compete in the ESCHL Tournament, March 15-17 in West Chester, Pa., since they should have Ryan, sophomore forward Jordan Bochinski, and freshman forward Josh Fricks back in action then.

Liberty will have less than a week after the ESCHL tournament to prepare for the March 21-26 ACHA DI National Championships in Frisco, Texas.

"If we continue to play the way that we've been playing, fast and physical, high tempo and a lot of skill, it's going to be tough to beat us," Crane said. 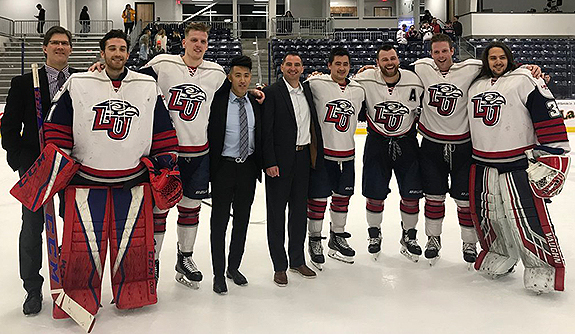