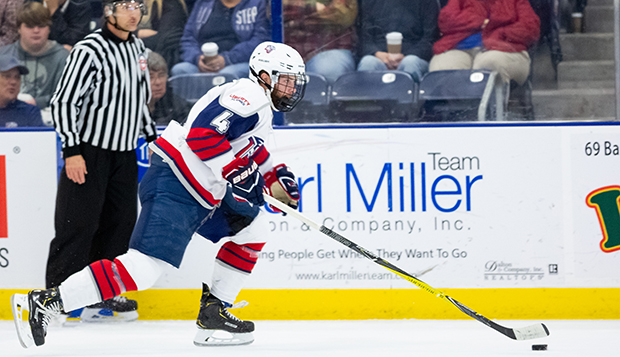 Senior forward Zechariah Roberts, playing in his first game since fracturing his fibula in early November, scored two of the first three goals for Liberty University's ACHA Division I men's hockey team, opening the floodgates for the Flames in Friday night's 9-2 opening rout of Alabama at the LaHaye Ice Center.

"It was a long recovery coming back, and I was definitely nervous and excited to be out there but that's a God thing, I think," Roberts said. "I was not scheduled to play a lot this weekend, maybe a couple shifts here and there, and I was at the right place at the right time. To go back out there, it's a little emotional, but it's fun to be on the ice. I felt like I was playing my first game again."

The Frozen Tide struck quickly to seize a 1-0 lead in the first minute of action when forward Taylor Joseph intercepted a puck in the offensive zone and lifted a wrist shot from the right crease past Liberty senior goalie Josh Halpenny into the top right corner of the net.

Moments after sophomore forward Cole Gammer's backhanded putback bounced off the right post, Liberty capitalized on a power play to net the equalizer. Brock Thompson, filling in at center for fellow junior linemate Quinn Ryan who is representing Team USA in Russia, ripped a wrist shot from deep in the right circle into the left-side netting.

Flames junior forward Josh Hamilton set up the go-ahead goal a minute and a half later, gathering the rebound of his own driving shot and skating behind the cage before spotting sophomore Devin Pierce cutting into the slot and feeding him for a point-blank finish and a 2-1 lead.

But Alabama re-tied the contest at 2-2 just 10 seconds into a power play when forward Nicholas Messina blasted a slap shot from the top of the right circle that rattled into the top-left-corner of the cage 18 seconds before the first intermission.

Liberty netted the game's final seven goals to ice the victory over the 20th-ranked Frozen Tide (16-16).

Roberts was the beneficiary of an assist from senior defenseman Matt Cruickshank on the game-winning goal for the Flames. Cruickshank received a pass from Thompson at the top of the right circle and skated through two defensemen before flicking a cross-crease pass to Roberts, who redirected the puck past Alabama goalie Gunnar Nielsen with 14:45 left in the second period.

Thompson and Roberts padded Liberty's lead to 5-2 with back-to-back power-play putbacks in a minute-and-a-half span midway through the period. At the 11:02 mark, Thompson pocketed a wide-open shot from the right side after senior forward Zak Hayes flicked him the rebound of a shot by freshman forward Josh Fricks from the left crease. Then, with 9:37 left in the second stanza, Pierce's shot from the high slot bounced directly to Roberts right off the net for an open finish.

"We were able to capitalize on three power-play goals and we got contributions up and down our lineup," Flames Head Coach Kirk Handy said. "Roberts is a glue guy inside that locker room, and it's great to have him back. He's a special guy. First game back and he scores two big goals for us there."

Just over two minutes into the third period, seconds after a power play expired, Liberty extended its advantage to 6-2 when Gammer skated through the outside edge of the left circle and sent an entry pass to sophomore forward Ryan Cox for a point-blank putaway near the left post.

Hamilton received Pierce's pass from along the backboards and stretched the Flames' lead to 7-2 a little over a minute later with a shot from the right circle that glanced off Nielsen's glove inside the right post.

Textbook execution on a fast break started by junior forward Victor Blomberg's outlet pass to Pierce and finished by Gammer in the right crease off a crossing pass from Cruickshank gave the Flames a commanding 8-2 advantage at the 7:02 mark. Junior defenseman Chaydan Lauber capped the scoring less than a minute and a half later by launching a wrist shot from the left point off a backhanded feed from a faceoff won by junior forward Andy Clarke.

"The team played great, especially in the third period," Roberts said. "We picked it up and it was a whole team effort, and that's what we need to see at the March 21-26 ACHA DI National Championships in Frisco, Texas." 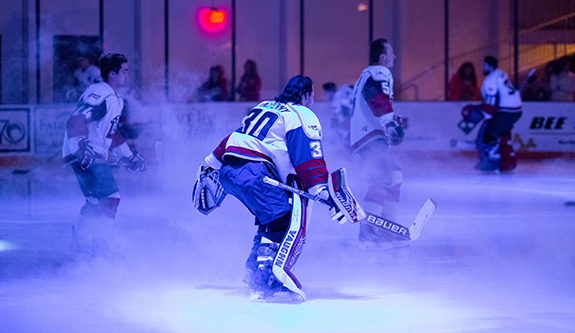