Alabama series will be home farewell for six Flames 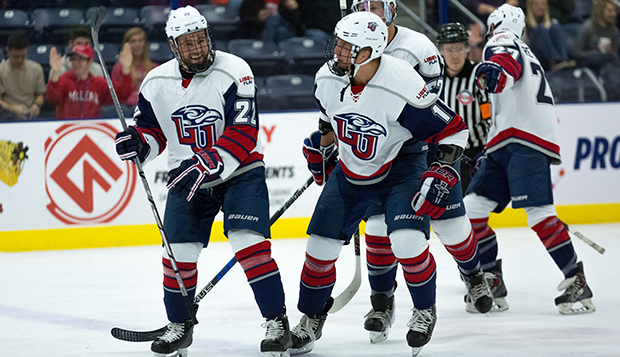 Roberts, who has missed most of this season due to injury, is planning to return for a fifth season of eligibility as a graduate student next year.

After clinching their second straight Eastern States Collegiate Hockey League (ESCHL) regular-season championship and autobid to the March 21-26 ACHA DI National Championships in Frisco, Texas, the Flames, who slipped to No. 10 in this week's national rankings, will look to generate some momentum for the postseason in their regular-season series finale against the 20th-ranked Crimson Tide.

Liberty will have a week off before seeking to capture its third consecutive ESCHL Tournament title, March 15-17 in West Chester, Pa.

Series record: Liberty took a 5-3 lead in the series by winning both meetings Feb. 9-10, 2018, at home after splitting the previous three series over the past two seasons.

This weekend, Liberty will be without junior forward leading scorer Quinn Ryan (24G, 33A), who is in Russia competing for Team USA at the Winter World University Games. The Flames do return sophomore forward and third-leading scorer Cole Gammer (16G, 27A), who has missed the past two series due to injury.

Gammer and junior forward Brock Thompson (21G, 23A) will fuel the Flames' top line along with freshman forward Josh Fricks, a spring semester transfer who enjoyed a breakout game with two goals in last Friday's opener against Adrian.

Alabama scouting report: The Crimson Tide are 10-4 at home this season, but only 6-11 on away ice.