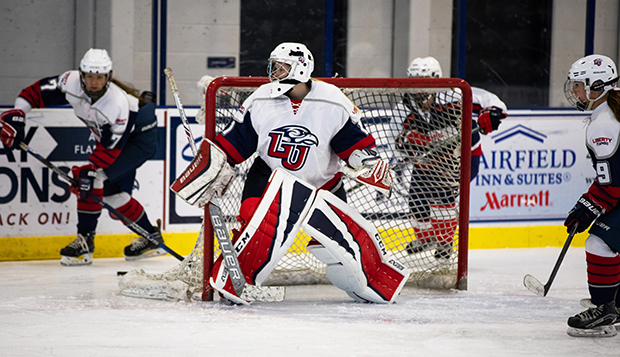 "It was a great weekend," Liberty Assistant Coach Rena Leone said. "The girls played extremely well and played as a team."

"We were playing in the other team's end the majority of the time, about 80 percent of the games," Leone said.

The Lady Flames got goals from seven different players against Delaware, led by senior forward Chelsey Greenwood who scored the fourth goal in the first period and the sixth goal in the second, both assisted by graduate forward Catharine Burrell (1 goal, 3 assists).

In the West Chester contest, freshman defenseman Delaney Adams and sophomore forward Brittany Hegele both scored twice, Burrell and Greenwood each had a goal and an assist, and junior forward Shelby Burden, Anderson, Turner and Niederer contributed single scores.

The Lady Flames will find out their final regular-season ranking next week before traveling to Johnstown, Pa., to compete in the March 16-17 College Hockey East playoffs. If they remain ranked in the top six in the East Region, they will qualify for the March 27-31 ACHA DII National Championships in Frisco, Texas.