Lady Flames take No. 1 ranking from Bulldogs after sweep 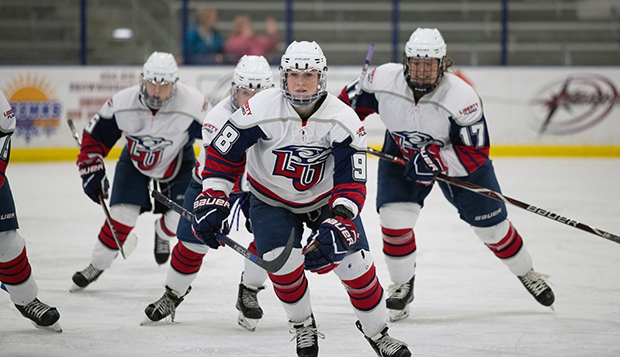 After its 5-4, 8-2 sweep of top-ranked Adrian College on Friday night and Saturday afternoon at the LaHaye Ice Center, Liberty University's reigning ACHA Division I national championship women's hockey team (24-1-3), which has occupied the No. 2 spot since the start of the season, replaced the Bulldogs (20-3-1) atop this week's ACHA DI national poll.

"We're excited about the weekend and proud of the No. 1 ranking," Lady Flames Head Coach Chris Lowes said.

He said it was especially inspiring to see his players overcome a 4-3 deficit by scoring the tying and winning goals in the final 2 minutes, 15 seconds of Friday night's opener, after Adrian scored three times in a span of six minutes midway through the period.

"Our girls get excited for those big games and we've got a bit of a rivalry going against Adrian," Lowes said. "We wanted to show that we could persevere and our girls responded well. To face that adversity in a big game and find a way to get it done, that's exciting, They beat us and tied us the first semester (Oct. 26-27 in Michigan), so to come back and get a couple wins should bode well for our confidence going into the national tournament."

The Lady Flames were last ranked No. 1 in the final poll of the 2017-18 season, after edging Adrian, 2-1, March 18 in Columbus, Ohio, for their second national title in four seasons.

The Lady Flames will find out their opponent in the best-of-three first round of the March 27-31 ACHA DI National Championships near Dallas when the final regular-season rankings are released on Feb. 26. If the rankings remain the same, Liberty would face No. 8-ranked Grand Valley, a team it swept by 4-1 and 7-2 scores Dec. 1-2 in Hudsonville, Mich.