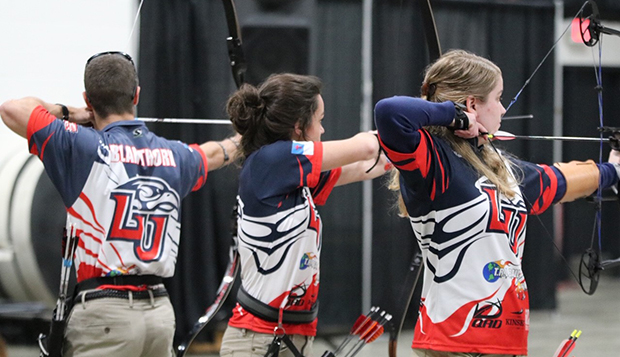 Liberty sent six men's and eight women's archers to Fishersville, Va., where 11 placed in the top five and they all shot personal best scores. (Photos courtesy of Amy Skelton)

Liberty University's archery team placed 11 of its 14 competitors in the top five of their respective divisions at Friday's and Saturday's regional shoot for the 50th annual USA Archery Indoor National Championships at the Augusta Expo Center in Fishersville, Va.

Featuring approximately 150 collegiate archers, including complete teams from Liberty, host JMU, Atlantic Cape Community College in New Jersey, and Hocking College in Ohio, it was one of the largest and most competitive of the 13 regional events, held between Dec. 28 and Feb. 23.

The Flames and Lady Flames were led by Brenda (Natsu) Eleicegui, a transfer from Argentina who placed second in women's Olympic recurve with 329 points, sophomore Hannah Suber (second in women's barebow, 533), freshman Hala Skelton (third in women's compound, 1,142), and freshman William Allan (third in men's barebow, 715). After results from the other 12 regions are factored, Liberty's competitors will find out if they qualify for national podium finishes.

Skelton lost a tie-breaker for second place by one bullseye (63-62), and finished only five points behind JMU's Caroline McCracken (1,147), one of the top archers in the nation.

"Overall, it was a good showing," he said. "We've got to work a little more on our mental game; nerves got to a few of them. But I couldn't ask any more of them. Everybody on the team shot personal best scores for their indoor rounds."

Senior Louis Boyd, who became Liberty's 10th national champion by winning the men's bowhunter indoor title last season, held a 10-point lead in the men's compound competition with three shots left and missed the target completely with one of them to fall into fourth place with 1,126 points, eight points out of first place.

Rigney will take a select travel squad to the USA Collegiate Archery Outdoor Target National Championships, set for May 17-19 in Dublin, Ohio. 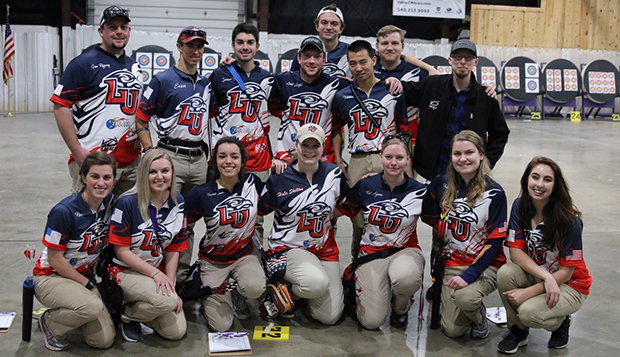